The second must-see event of the Belmont spring/summer meet will be the return of the popular Stars & Stripes Festival on Saturday, July 8. Featuring some prestigious Turf races, it is expected to attract local and international stars: Shaman Ghost, Cupid. Irish training legend, Aidan O'Brien, brings his Whitecliffsofdover for the Belmont Derby Invitational.
It could well be called a TURF FESTIVAL, as it will feature a pair of prestigious Grade 1 races on the turf for 3-year-olds in the $1.2 million Belmont Derby Invitational and the $1 million Belmont Oaks Invitational for fillies, both at 1 ¼ miles. The Suburban Handicap, the Dwyer, and the Belmont Sprint Championship round out a spectacular day of racing.

****************************************
ACROSS THE POND
France
Thunder Snow is the favorite in a field of just five for Sunday's Group 1 Jean Prat at Chantilly. The Godolphin runner won the Group 2 UAE Derby in Dubai, declined to run in the Kentucky Derby, finished second behind only Churchill in the Group 1 2000 Guineas and then was third in the St James's Palace. The four locals include Trais Fluors, an Andre Fabre-trained Danehill colt undefeated in four starts but stepping up in class. Gold Luck exits a second in the Group 2 Prix de Sandringham
Sunday
10:35 a.m. ET (15:35)  Prix Jean Prat (G1) Chantilly 3yo  1mi   CARD
Forecast: 4/6 Trais Fluors, 4/1 Lightupthenight, 9/2 Thunder Snow, 5/1 Turf Laurel, 7/1 Gold Luck
*********
England
Saturday's Group 1 Coral-Eclipse at Sandown gives the 3-year-olds a chance to show how they stack up against their elders. With Investec Derby winner Wings of Eagles injured and retired, the 3-year-old contingent for this 10-furlongs event includes the second- and fourth-place finishers from the Derby, Cliffs of Moher and Eminent, and Group 1 St James's Palace Stakes winner Barney Roy. Decorated Knight, most recently second to Highland Reel in the Group 1 Prince of Wales's Stakes at Royal Ascot, is the top chance among the older crowd. This is almost always a good race with massive implications for the remainder of the season.
Saturday
10:35 ET (15:35)   Coral-Eclipse (G1) Sandown  3yo+   10f   CARD
(British Champions Series)
Forecast: 7/4 Cliffs Of Moher, 3/1 Barney Roy, 7/2 Eminent, 7/1 Decorated Knight, 7/1 Ulysses, 20/1 Lightning Spear, 50/1 Desert Encounter, 50/1 Salouen, 66/1 Taj Mahal

The finish is likely to be dominated by 3-y-os BARNEY ROY, Eminent and Cliffs of Moher. Preference is for Barney Roy, who is arguably unlucky not to be unbeaten and showed no signs of stopping at the finish when landing the St James's Palace, leaving the impression that this trip will be within range. Eminent is taken to reverse Epsom placings with Cliffs of Moher and emerge as the main danger.
Timeform 1-2-3: BARNEY ROY (5)  EMINENT (7) CLIFFS OF MOHER (6)
****************************************
XBTV previews several of the stakes for Saturday at Belmont Park

IMP AND THE SUBURBAN
Imp and the Suburban

Requiem for the Suburban "Handicap"
Fifty years ago this week the legendary Buckpasser added to an already lengthy list of laurels by bravely winning the Suburban under an impost of 133 pounds, giving 22 pounds to runner-up Ring Twice. What made that victory, the last in his storied career, so special was that both his sire (Tom Fool, 1953) and dam (Busanda, 1951) had also won the 1 1/4-mile contest. To my knowledge, a sire-dam-offspring triple has not been achieved in any other race of national significance.

There have obviously been memorable Suburbans and Suburban winners since, but that edition neatly encapsulates what the Suburban once was and, with this latest change in identity, is unlikely to be again.
***************************
RESULTS FOR FRIDAY
Prairie Meadows Racing Festival
Mike Smith delivers in the Iowa Distaff and the Iowa Derby for trainer Asmussen
Hence closes last to first in Iowa Derby
Ditto for Danzatrice in the Iowa Distaff
The Iowa Derby completed a stakes double on the night for Asmussen and Smith, who won the $100,000 Iowa Distaff a race prior with Danzatrice, who also scored with a last-to-first rally. Gainesway Stables' daughter of Dunkirk earned her third stakes win by 1 1/4 lengths after she trailed by eight lengths early.
IOWA DERBY REPLAY
IOWA DISTAFF REPLAY
A day prior Asmussen and Smith teamed up twice at Prairie Meadows with Chanteline (third in the Saylorville Stakes) and Ever So Clever (sixth in the grade 3 Iowa Oaks), before the Hall of Fame jockey continued east for July 8's loaded Belmont Park card.
"I got to see a lot of old friends who I grew up with from Nebraska, Minnesota, and Arkansas, so it was nice seeing everybody," Smith said. 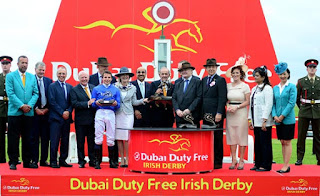 
Wicklowe Brave and Frontiersman clash in Curragh Cup
SUNDAY AT THE CURRAGH (Irish Derby weekend) - One of racing's most versatile horses, Wicklow Brave has excelled on the flat and over hurdles. The Willie Mullins 8-year-old will take his show to The Curragh on Sunday in the Curragh Cup where he is expected to meet Godolphin's Frontiersman who comported himself well in the runner-up spot behing Highland Reel in the recent Coronation Cup.

NEWS
Mike Smith's astonishing rise in the world rankings just keeps on going!
HASKIN: Get your scorecard! The Travers trail has begun!

Posted by Deltalady No comments: Links to this post 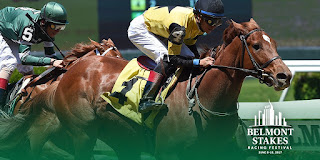 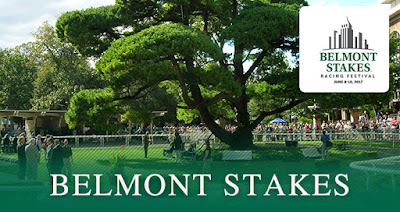 If you missed a race, the CARD below will also take you to the full Result and a Video Replay

﻿
Posted by Deltalady No comments: Links to this post