MY FAVORITE DERBY CONTENDERS
My faves are at the top on all the lists but they didn't start out there. I settled on my top two fairly early in the Derby Trail season, so wasn't influenced by what the so-called experts were saying.  Now I'm kind of worried, since they have all been mostly wrong anyway!  Most of the time, they didn't get any of the top finishers in a race right!  The only fairly consistent horse in the bunch has been Dialed In.

Before you read my choices below, here are some links to help you catch up with who's who and what's what on the Derby and the Oaks trails:

DRF's DerbyTop 20 - Links to watch performances, profiles and more
DRF:  Line up for The Oaks - Line up at bottom of story
Official Derby site - lots of info, profiles, etc.
Brisnet - Rundown on Oaks and Derby
Brisnet - Everything you could possibly want or need to know up to the minute
BloodHorse
Thoroughbred Times
All the Derby Prep Races, 1st, 2nd, 3rd winners under each video  Derby Prep Video Replay Wall
Kentucky Oaks Blog - May 1
Thoroughbred Times - Derby Diary by Soldat owner, Craig Robertson - See Fountain of Youth Derby prep race on the Derby Prep Video Replay Wall, which Soldat won. He also ran in the Florida Derby, in which he was the favorite, but he did not do as expected (Dialed In won).


**********************************************************************************
Ok, here are my choices:
In order, my picks:  DIALED IN, MUCHO MACHO MAN, and NEHRO.  I love Uncle Mo, but he was never on my "I think he can win" list since he just doesn't look like he can go the Classic distances.  If I were betting, I would still go with these three, because I think each has a very good chance to win.
DIALED IN:  Here are Dialed In's races:  In his maiden, he did everything wrong, and the announcer seemed to not even see him and nearly missed his final charge!  Dialed In's Maiden Win  /  Dialed In - Holy Bull Jan 30  /  Dialed In - Florida Derby - Soldat was favorite  Dialed In - DRF with Pedigree Analysis  He also ran in an allowance race to qualify for the Florida Derby, against older horses, and came in second behind his stablemate, Equestrio, a 4yo.  The criticism in the Fl Derby was that it was slow and that the only two horses that really showed up for the race were Dialed In and Shackleford.  Here is what Steve Haskin had to say about that:  "As for the Florida Derby itself, some are knocking the slow closing fractions, but in defense of the only two horses who did anything in the race, Dialed In overcame a speed biased track, on which none of the other winners came from farther back than 1 1/2 lengths. He had to run a :47 flat half within the body of the race just to maintain his position, which was at least a dozen lengths off the pace. He then unleashed a powerful run on the far turn, but had to swing six-wide turning for home. Shackleford was well into the stretch while Dialed In was still on the turn. He shaded :13 for the final eighth, with jockey Julien Leparoux giving him only three left-handed whacks and hand-riding him most of the way. In short, Dialed In won this race on his own talent and determination."  I realize as a closer he may be at a disadvantage for the Derby, but, if he lucks out with track conditions in his favor, he just may pull it off.  He's not afraid of a challenge, that we know.
MUCHO MACHO MAN - He hasn't won many, but he's been in the money in 7 of his 8 races, including the three maidens. Risen Star - Mucho Macho Man   He threw a shoe in the La. Derby and still came in third.  Here's his page at HRN, scroll down to the bottom for all his races:  HRN - Mucho Macho Man - Profile and Races   Mucho Macho Man Profile, Races and Pedigree Analysis I keep pointing this out, but he doesn't turn 3 until June, and he's been to the starting gate 8 times, and each time has made a good account of himself.  He seems to be improving at a time the experts say they like to see it happen.  Just have to like a horse with a trainer who has overcome great odds (heart transplant!), a terrific ownership model, and Mucho is almost 17 hands (who knows, he may still be growing!), and he seems to know what to do with all that size and muscle.  A lot of fun to watch.

NEHRO:   I note that this week, Nehro has moved up to #3 on the DRF's Top 20 on the strength of his second place finishes in a couple of races.  If the race had been longer, looks like he would have overtaken Archarcharch in the Arkansas Derby, and he sure looks good for the Derby and other TC races:  Arkansas Derby - Archarcharch 1st Nehro 2nd   La. Derby - Nehro 2nd  Took him 3 tries to break his maiden, and I think he's just discovered what he's supposed to do!  Here's Nehro's page at HRN:  HRN Nehro page  Nehro's also #3 on Brian Zipse's list, and Brian has a great grid to view the top picks and watch their races:  HRN's Top Derby Contenders   Nehro - DRF Pedigree Analysis - Races  Nehro hasn't won anything, but his attraction is he's breathed down the necks of the winners in two recent races and he just looks so good doing it, you just know he's improving and is a contender. Looks like he can run all day. He's #5 on BloodHorse's list.
DRF Top 20  Click on the individual horse for video clips and the rundown on each horse's pedigree, etc. BloodHorse Derby Field   Steve Haskin Derby Dozen - 4-22-2011
My "darkhorse" would be Archarcharch.  He was really impressive in the Arkansas Derby: Archarcharch - Arkansas Derby  HRN Profile - Archarcharch - Videos at bottom of page  He's moved up to #4 on the DRF chart and #6 on BloodHorse's chart. Here's what Steve Haskin has to say about him:  Steve Haskin on Archarcharch!

In the Oaks, there are several I have followed:  Zazu (Jerry and Ann Moss,owners, so am partial), Kathmanblu, and R Heat Lightning, so I'm going
to stick with these:  BloodHorse - Kentucky Oaks picks  May expand on this later. 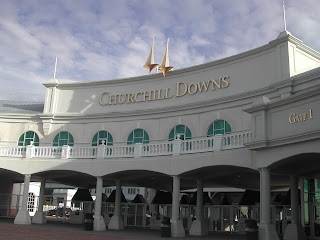 So, what say you?  Most say that the Derby has been thrown wide open with no clear super horse looking like he's going to run away with everything.  And don't know if you have been counting, but there have been a large number of horses pointed to the Derby in January that have dropped off for various reasons, including injuries, poor performance, etc. (I'm sure someone has been tracking the exact number.)  Uncle Mo stubbed his toe pretty badly in the Wood, a race that was supposed to be almost a walkover for him.  If his infection was the cause and if he can get 100% before the Derby...well, who knows!  We want all the horses to be able to compete at the top of their game, and, most of all, to come home safe.  They are all worthy of our attention, affection, and appreciation for the effort they put out and the thrills they provide.
Posted by Deltalady

Email ThisBlogThis!Share to TwitterShare to FacebookShare to Pinterest
Labels: At the Races

I really like Dialed In. Not sure about Uncle Mo, but am certainly going to keep an eye on Midnight Interlude. As for the Oaks I really like Joyful Victory and I think she will give R Heat Lightening a run for her money. I also really like Arienza, but not sure that she can get by my first two. Not sure the timing is quite right for her!
and of course I have to like Mike Smith on Joyful Victory as well.