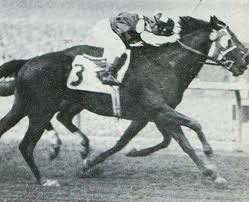 HISTORIC SAN JUAN CAPISTRANO MARATHON CLOSES OUT SANTA ANITA MEET ON SUNDAY WITH BOURBON BAY SOLID CHOICE FOR REPEAT WIN
April 22, 2012
The SAN JUAN CAPISTRANO is the longest marathon race in the U.S. Can you believe this tremendous test of endurance carries only a $150,000 purse, and it has dropped from a Grade 1 to a Grade 2? This is just shameful in my mind. Just shows how low on the list of quality races marathons have fallen in the U.S. Today's tbs are too fragile and have less stamina than horses of the past. For most of its existence, the race has been run at either 1 1/2 (12 f) or 1 3/4 mi (14 f). Noor won the race in 1950.*
Noor battles Citation down the stretch 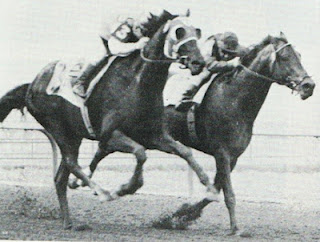 In 1964 it was so over-subscribed that it was run in two divisions!!! The big favorite today, Bourbon Bay, won this race in 2010. It is for horses 4 yyears old and up. Mike Smith will be riding a Bill Mott trainee and Florida shipper, Harrod's Creek, seeking his first stakes win. The only other graded stakes winner in the 6-horse field is another Florida shipper, trained by Graham Motion, Eagle Poise.

*Noor is famous for many reasons, mainly though, he was Citation's nemesis, beating the TC winner 4 times. Also, he beat Assault, another TC winner, becoming the first (and still only) horse to beat two Triple Crown champions. He raced 10 times in 1950, from 9f to 16f (2 mi), winning 6 times, with 3 seconds and 1 third. His third was the only time he finished behind Citation, who was second! He beat the 1950 HOY, Hill Prince, and he also defeated Ponder, the 1949 KY Derby winner! He is also famous for being owned by Charles Howard, Seabiscuit's owner.
Read more about today's race at:  Santa Anita - Press Release
Read more about Noor at several web sites:  Maggiemae - Noor
Facebook page:  Noor: In Memory of a Champion
Noor's Wiki page

Brian Zipse on marathon racing in the U.S.
Posted by Deltalady

Email ThisBlogThis!Share to TwitterShare to FacebookShare to Pinterest
Labels: Horse Racing, Horses, Other