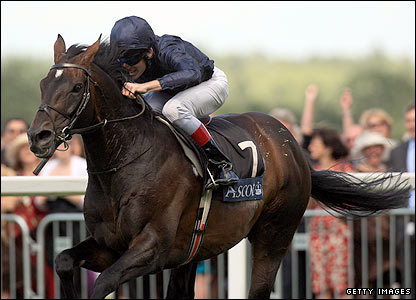 SOME SAY
BEST STAYER
EVER?

by Kellie Reilly
When YEATS (Ire) (Sadler's Wells) swept to the front in Thursday's Gold Cup (Eng-G1) at Royal Ascot, the eight-year-old was powering toward an historic milestone that had never previously been achieved -- a fourth victory in the premier contest for stayers. Seizing the 2 1/2-mile prize in his fierce grasp, the Aidan O'Brien star stormed clear not once, but twice. His initial surge propelled him well clear of the field, with only Patkai (Indian Ridge) desperately trying to mount a rally in midstretch. As Yeats heard the hoofbeats of the pursuing Patkai, he produced yet another change of gear to draw away by 3 1/2 lengths, and to establish a Gold Cup record that may never be equaled.


To put Yeats' four Gold Cups into proper perspective, we must turn to the annals of the Ascot feature, which dates back to the time of the Napoleonic Wars. (For a handy reference list of all past winners, visit the Turf Hallmarks section of tbheritage.com.  Click here)

Since its inaugural running in 1807, and until the advent of Yeats, a grand total of 20 horses have won the Gold Cup more than once. Of them, only one, Sagaro, captured the race three times (1975-77), but he was retired to stud after his third coup and never got the chance to bid for a fourth.
...
While Yeats deserves to be on the short list of all-time great stayers, we must remember that he has capitalized on an exceedingly rare opportunity. And, in turn, Sagaro was afforded a third chance that other members of the pantheon did not enjoy. Indeed, several of the sport's titans landed the Gold Cup in their sole attempt -- the invincible St. Simon in 1884, to mention only one -- and would have added to their trophy collection if given the chance.  Read more...