LET'S GO TO THE RACES

A quick reference tool meant to help the newer fan (like me!)


FLASH:  FREE LIVE STREAMING - FOUNTAIN OF YOUTH - GULFSTREAM
The racing action heats up this weekend with several key races for horses and fillies on the road to the Kentucky Derby and the Kentucky Oaks. The new points system for qualifying for both races gets richer and will have serious implications for those who wish to be in the starting gate on the first Friday and Saturday in May. Undercard action will also be exciting for older horses in a few races as well.  Here's Jon and Joel's look at the two big ones this weekend:  TCI Insider - Jon and Joel handicapping video

NOTE:  For coverage of international racing, see below the Featured Races.  Australia has three Group 1 events, which will be run late Friday evening and early Saturday EST.

RACING AT THE FAIR GROUNDS, SATURDAY
On an undercard, I'm really pulling for OPTIMIZER. He seems to like the turf, and hopefully he has found his niche after much trial and error. He's in an undercard feature at the Fair Grounds on Risen Star day in the FAIR GROUNDS HANDICAP. Race 7 goes off at 4:25 EST.

On another undercard race, winning machine DAISY DEVINE will be running in Race 5, the BAYOU HANDICAP.

Then, in the MINESHAFT HANDICAP, several familiar faces will meet up, including GOLDEN TICKET, MARK VALESKI, HERO OF ORDER in Race 8, 4:55 ET.

In a Kentucky Oaks prep, the RACHEL ALEXANDRA STAKES will feature Gary Stevens flying in to ride Tom Proctor's MIDNIGHT BALLET, and Rosie Napravnik will be aboard a Pletcher trainee, UNLIMITED BUDGET.

Stevens is also scheduled to ride PROUD STRIKE for Steve Asmussen in the Risen Star. Some of the Derby hopefuls expected in the RISEN STAR will include NORMANDY INVASION, DEPARTING, OXBOW, & cross-entered in both the Risen Star and the Fountain of Youth at Gulfstream, HE'S HAD ENOUGH, with Mario Gutierrez riding. Wherever He's Had Enough winds up, LAVA MAN is expected to be there as his coach!! GO LAVA MAN!! He brings his own star power! Last news report indicated Team O'Neill will opt for the Fountain of Youth over the Risen Star because of a more favorable gate draw in the FOY.   Risen Star nominees PPs

GULFSTREAM FOUNTAIN OF YOUTH
The Grade 2 FOUNTAIN OF YOUTH is one of three graded stakes on Saturday’s card along with the $250,000 DAVONA DALE for 3-year-old fillies and the $150,000 CANADIAN TURF.

The large field, which includes favored  VIOLENCE and late entrant HE'S HAD ENOUGH, even caught racing secretary Dan Bork a bit off guard.

“We were expecting somewhere in the range of six to seven horses for the race, so obviously we had a few late additions, which naturally came as a pleasant surprise,” Bork said.  Read more at source

If you are serious about keeping up with the horses, standings, race outcomes, etc. on the Derby Trail, don't miss the recap by Jeremy Plonk at DRF.  Road to the Derby: Prep races, replays, leaderboard   Scroll down under the Point Standings to a list of the Derby Prep races. Click on the race, and read Jeremy's re-cap. Very enlightening, because Jeremy sees things I would never see and points them out. We are moving into the next phase of the preps, where the points to be earned will put the winner in the starting gate of the KY Derby, and the secondary points to the next three finishers can earn some important points as well. From Feb. 23 thru March 24 is the first leg of the Championship Series in which the races will be worth 85 points, with 50 pts to the winner, and 20-10-5 to the next 3 finishers. I'm betting that from here on out, the starting gate for each of these races should see full or near-full fields.

For info on the Oaks prep series, go to the Kentucky Derby Oaks site: http://www.kentuckyderby.com/oaks Standings and horse profiles, along with replays can be found there.

AUSTRALIA: There are some international races you may want to take note of, which because of time differences, will be run late this evening (Friday) and early Saturday. In Australia, the main action will be at Caulfield with three Grade/Group 1 races: the FUTURITY, the BLUE DIAMOND, and the OAKLEIGH. ALL TOO HARD, Black Caviar's successful half-brother, will face Melbourne Cup winner Gree...n Moon in the Futurity. Then, in the Oakleigh, ORTENSIA returns from her largely successful international tour to meet unbeaten in 11 starts, Barakey, and not to be dismissed, Shamal Wind, highly promising 3YO filly who is unbeaten in three starts and looks hard to beat with only 111lb.

In the Blue Diamond, you might want to keep an eye on MIRACLES OF LIFE. Small at 15 hands and around 924lb, she can run. In BD Preview (1000m) on January 26, she ran 0.8 seconds quicker than male 2YO's that day.  For more on this race and filly:  Jockey of Miracles of Life guest blog Race replay 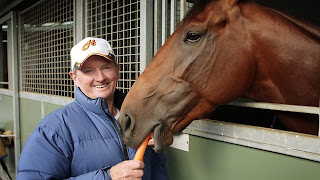