Below originally published June 2013, scroll down to December 2016 updates as Charismatic returns home to Old Friends in Kentucky, after his stud career in Japan ended.

The Belmont Stakes scheduled for this Saturday, June 8, brings back many memories no doubt for all racing fans. It is the 40th anniversary of Secretariat's historic win of this race, culminating in his Triple Crown in 1973, the first since Citation's Triple of 1948.
﻿
Four years later, in the decade termed "the Golden Age of racing", we saw the remarkable Seattle Slew, and the following year, the great Affirmed, add their names to that short list of Triple Crown champions.  Some great horses of that era included Spectacular Bid, Sunday Silence, Alysheba, Pleasant Colony, Silver Charm and Real Quiet,  all who successfully completed the first two legs, only to fall short in the Belmont, the "test of Champions".
﻿
﻿﻿It also marks the 15th anniversay of the gallant and ill-fated effort by Charismatic to complete the third leg of the Triple Crown run in 1999, the 7th such attempt after Affirmed's win in 1978.

So remembering Charismatic, another beautiful chestnut, here is a link to a story by Steve Haskin, senior writer for BloodHorse, followed by the ESPN special, split into 5 installments.  Steve's story appeared just prior to the ESPN special which aired in October 2011.   "Heaven and Hell" - Steve Haskin 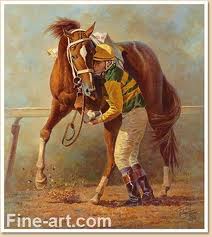 More to come.....
Posted by Deltalady