BRITISH CHAMPIONS DAY!
"The Next Big Thing" in the world of racing is BRITISH CHAMPIONS DAY, OCT. 19 - click here! Billed as the "richest day in British racing", it looks to be star-studded, with $3.4 Million Pounds ($5 Million plus USD) in purses. At the link is a listing of the races, as well as the category leaders for each contest. Coming roughly 2 weeks prior to North America's premier event, the Breeders' Cup, British Champions Day is viewed by many in the Colonies as a "talent drain" for the U.S. event.
Nevertheless, it will be exciting and will be available "live" in the U.S. via many streaming sources.  Being a recent convert to overseas horse racing, I am eagerly anticipating watching this event.
Video preview of Champions Day including review of races in series 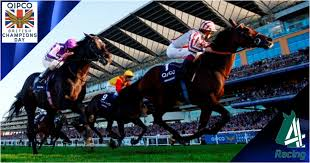 The Berkshire racecourse’s roots go back 300 years to Queen Anne, who recognized the potential of a stretch of heath land while out riding just a few miles from Windsor Castle. The royal link has endured ever since.

Some of the stars expected to make their appearances are THE FUGUE, SKY LANTERN, ESTIMATE, LEADING LIGHT, ELUSIVE KATE, AL KAZEEM, DAWN APPROACH, TORONADO, IGUGU, LETHAL FORCE, SOFT FALLING RAIN, INTELLO and many more!  It was announced this week that Declaration of War is headed to the Breeders' Cup in light of the predicted soft ground at Ascot on Champions Day.  Other defections are likely, also.

QUEEN ELIZABETH II STAKES, which Toronado and Dawn Approach are both entered for, raises the tantalizing possibility that the pair may resume a fierce rivalry that currently stands 2-1 in favor of Dawn Approach.

Dawn Approach won their first two meetings, in the 2,000 Guineas and St James's Palace Stakes, before Toronado struck back in the Sussex Stakes at Glorious Goodwood more recently.

Toronado also holds an entry in the CHAMPION STAKES, as does his stablemate and 1,000 Guineas winner Sky Lantern, plus the British, Irish and French Derby winners (Ruler Of The World, Trading Leather and Intello).

Britain's leading older racehorse Al Kazeem, winner of the Prince of Wales's Stakes and the Coral-Eclipse, is another engaged for the race.

The Qipco British CHAMPION FILLIES & MARES STAKES, being run as a Group 1 for the first time, has doubled in value to £500,000 and attracted a plethora of European talent.

ABIGAIL'S CORNER!  Abigail Anderson has kindly provided us with her "Notes" for British Champions Day.  Please click here to download a printable version for your reference.  Thanks, Abigail!

About the Champions Series 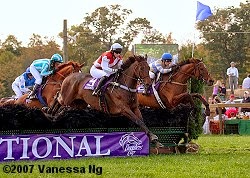 In the U.S., the sport of "steeplechasing", or "hunt racing" is not that widely known, however, it is a flourishing sport among many who enjoy this type of racing.  Among aficianados, Far Hills is the center of the universe each year, with the backdrop of Autumn providing Mother Nature's own decoration.  It is where the Grand National takes place, a race that dates back to 1899.  Past winners include 11 of the 14 steeplechasers inducted into the National Museum of Racing and Hall of Fame: Flatterer (also a close second in the 1987 Champion Hurdle), Zaccio, Café Prince, Bon Nouvel, Neji, Oedipus, Elkridge, Bushranger, Battleship (in 1938 became the only winner of this race and the Aintree Grand National), Jolly Roger and Good and Plenty.  The day of steeplechasing at Far Hills includes seven races, the most important of which is the Grand National.

Considered one of the premier social events of the year in the tri-state area, it is attended by as many as 75,000 people annually. Family and friends create unique and often extravagant fall picnic areas, complete with beautiful floral center pieces, haybale seating, ice carvings and culinary feasts. For many visitors, the Race Meeting is a time-honored tradition and a joyous reunion of family and friends.

AUSTRALIA - CAULFIELD CUP DAY
The Caulfield Cup is one of the biggest events on the Australian racing calendar second only to the Melbourne Cup and the interest is global both from trainers and owners as well as general punters.   It is a Group 1 event raced under open handicap conditions in Australia’s racing capital, Melbourne.   See below for links to entries and more race information.  Caulfield Cup Preview and Entry analysis

Note:  International and NA champion races on tap Oct-Nov.  Be sure to scroll to the NEWS/COMING UP section for info and preview videos for the Cox Plate, Breeders' Cup, and Melbourne Cup.  A collection of video previews and other links to get familiar with these fields.

Ann Maree's Time Ordered LIST and ENTRIES - This is a printable file.

More info on today's races:
Ruler of the World in Champion Stakes

Other flat racing in the U.S. include several state-bred races, and there are a handful of races at Belmont.  Check this index of today's racing calendar for full details and entries:  Index of weekend's racing events across U.S.

Back in Time
Kincsem: The Mystery and Majesty of an Immortal - THE VAULT
A tip of the hat to Round Table