KING GEORGE PRODUCES THRILLING FINISH AND GUTSY CLUTCH VICTORY BY POSTPONED! Eagle Top briefly was in front in the last 100 yards, but Postponed would have none of it, sticking his nose in front at the wire, displaying bravery and determination where it counted.  The defections of Golden Horn and Flintshire in the King George opened the race up to produce one of the most thrilling finishes to the contest in years, with POSTPONED refusing to surrender to Eagle Top at the wire. A heart-stopping finish, and one sure to go down to rival the 1975 contest between Grundy and Bustino, which has often been referred to as the "race of the century" in the UK. The win by the son of Dubawi adds to the many other successes by this sire for the year.  Additional coverage by the UK Telegraph - click here  More of the story - click here   Full result - click here   Racing Post result with comments

Ten Up For King George | TDN
King George VI and Queen Elizabeth - History
Be sure to visit this web site. There are a couple of videos also of past praces

From Wikipedia:  In 1975, "The Race of the Century" between Grundy and Bustino
It is Britain's most prestigious open-age flat race, and its roll of honour features some of the most highly acclaimed horses of the sport's recent history. The 1975 running, which involved a hard-fought battle to the finish between Grundy and Bustino, is frequently described as the "race of the century". Many of its winners subsequently compete in the Prix de l'Arc de Triomphe, and a number go on to have a successful career at stud. The race is often informally referred to as the "King George".

SUMMER AT SARATOGA, COMING UP! 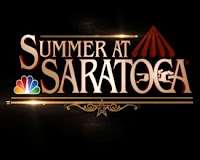 In the opening day Schuylerville for juvenile fillies, TONASAH will likely get another chance to compete against the top two from the June 4 Astoria, MOMENT IS RIGHT and DECKED OUT. I say another chance because TONASAH is the one who was set to make her career debut in the Astoria, only to run loose around Belmont Park and have to be scratched. The Todd Pletcher filly came back to wire a five-furlong maiden by 5 1/2 lengths. Pletcher is also expected to send out debut maiden winner POSITIVELY ROYAL.  Read more at source.


RESULTS
For replay of races, click on CARD below under Featured Races


Come back here after a race has completed to see replay at the CARD, below.

The downside to all this hoopla over AP's latest workout is it is likely to chase off competition and any races he runs in probably will not give him much of a challenge. I hope good horses will step up and enter races he runs in, but it may take the Breeders' Cup before we get to see him run against top horses. Playing against time here, and, there's always a chance he could have a hiccup, with even a small setback calling a halt to his career sooner rather than later. Baffert will do his part, I think, with a lot of history behind him to guide him through this journey. He's not likely to make some of the mistakes that were made with Secretariat or Seattle Slew in their post Triple Crown race schedule. Another good thing in AP's favor, I think, is the fact that he hasn't had that heavy of a racing schedule (not downgrading the Triple Crown, just that as far as the number of races he has run in, he is the lightest raced TC winner by a lot of races.)

American Pharoah's jaw-dropping workout at Del Mar July 23, 2015
In other news from the Spa, champion Untapable could wait for the August 29 Personal Ensign (G1) (story here) and multiple Saratoga Grade 1 star Palace (City Zip) is ready for the second half after a freshening (story here).