Some thoughts: No one connected with this horse should waste one moment second-guessing themselves. And Pharoah himself owes us nothing.
Keen Ice was lucky on Saturday, he caught a tired horse that, as we have seen, on any other day he couldn't get close to AP. Even a tired American Pharoah almost pulled this off.
Time enough to regroup and prepare him for a last hurrah in the Breeders Cup. In the meantime, the American Pharoah celebration can continue, we can watch him train, watch him meet and greet, we can revel in living to see something really special and the sport, at least for a short period, be in the spotlight for something positive.

As Dottie used to say about Zenyatta, "Every time she crossed the finish line, she took all that was good about the sport with her." The same can be said of American Pharoah: His campaign this year has been one long "happy dance" for the fans. No worries, Pharoah. You lost not one ounce of respect. You are and always will be a "winner", no matter what you do from here on out.

American Pharoah himself may not have been aware the effects of travel and competition were bound to catch up with him.  The signals Pharoah sent were all positive. With the positives Pharoah put out, Baffert would have been pilloried had he decided not to run him. He would have been asked, and rightfully so, "based on what?" As it was, the tired horse almost pulled it off. He was never farther back than second.  He is still the champ! They beat a tired horse yesterday, but not by much...he was never farther back than second. Even after the race, he is still the class of the field...he lost nothing in defeat.  by Deltalady
﻿ 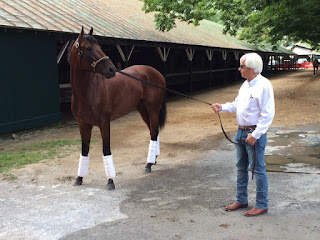 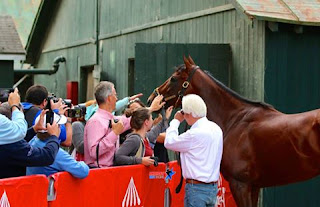 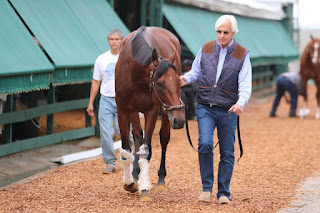 
Pharoah looks to be first Triple Crown winner since Whirlaway 1941 to take Travers
Hard to believe, but it's true: 4 have tried,
with only Whirlaway succeeding. More below on this story!
Read about the amazing career of Whirlaway, known by his fans as 'Mr. Longtail'!
American Pharoah, by virtue of his skimpy tail has been nicknamed
by some as 'Mr. Short Tail!" Will he succeed? Today is the day we will find out! 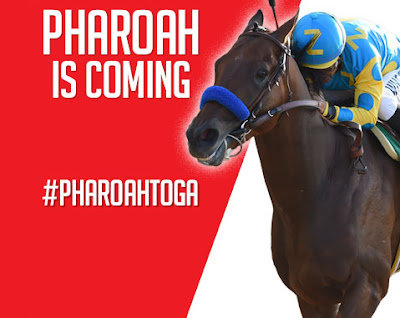 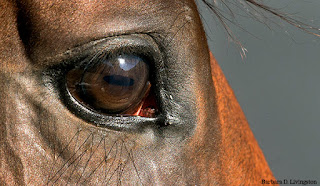 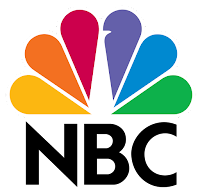 AND LOOK WHO'S IN THE SWORD DANCER! Some overseas talent coming, no doubt lured by the $1 Million purse: FLINTSHIRE (GB). Germany, France and Brazil are also represented. And my favorite,. TWILIGHT ECLIPSE! Lest we forget, March 23, 2013: Set new world record of 2:22.63 for 12f on turf in winning the Pan American S. at Gulfstream Park. Also, Twilight Eclipse was purchase at a livestock sale for $1,000 before winning his first two races. Looks like RED RIFLE will likely be the favorite, since he has beaten a couple of his rivals in this race recently. Sword Dancer with an international cast   Video - TVG International Cast in for the Sword Dancer

WHIRLAWAY - the only Triple Crown winner that has won the Travers, sometimes called the "fourth leg of the Triple Crown." Two nice articles about Mr. Longtail, the quirky horse that won the Triple Crown in 1941, and at the same time launched the dynasty of Calumet Farm. Below that are a short video of Whirly's TC run, and then ESPN full documentary on the career of this remarkable horse.

Brisnet - Kellie Reilly - Whirlaway cameo
Whirly may have driven his famous trainer to the edge of insanity, causing Plain Ben to declare him to be the "Dumbest horse I've ever trained," but Jones also knew that Whirlaway was the fastest horse he had yet trained, and continued to spend hours with the colt in an attempt to cure him of his bad habits and fears. Only Plain Ben's love for Whirlaway and his confidence in the horse's talent kept his patience intact.  From Brisnet's Kellie Reillyc- Read more

Unofficial Thoroughbred Hall of Fame - Spiletta
Whirlaway had the genetic deck stacked against him when he drew his temperament card, as both his sire and his dam had reputations for being excitable....    Hence Whirlaway inherited plenty of raw ability with a complimentary set of psychoses to match, and this heady cocktail was served up early in his two-year-old season.

The elder Jones was said to refer to Whirlaway as "The Half Wit" due to his lack of ability to run in a straight line. He had the habit of bearing out, and when he was in the lead he liked to slow down and zig-zag across the track, apparently bored.

The chestnut colt with the flying tail began his racing career on June 3, 1940 with a narrow victory in Chicago under Jack Richard. He was far superior to the rest of the field, as evidenced by the fact that he covered virtually every inch of the track, with special attention given the outside rail, while the rest of the youngsters ran a straight line.

Since Whirlaway was both the most promising and the most difficult horse in the Calumet lineup in 1940, Ben and Jimmy Jones decided that the fairest way to split the workload was for one of them to concentrate on Whirlaway while the other trained the rest of the barn. Ben Jones became Whirlaway's dedicated tutor.

Frightened by many things in his environment, he was difficult to saddle, prone to rear and jump, was known to miss the break, and had a penchant for going extremely wide in his races. So intractable a pupil was he that Jones called him the "dumbest horse I ever trained."  From UTHOF - Read more

A Closer Look At The Travers at Saratoga Race Course: America's Oldest Stakes Race for Thoroughbreds (from the Saratoga web site and Wikipedia) 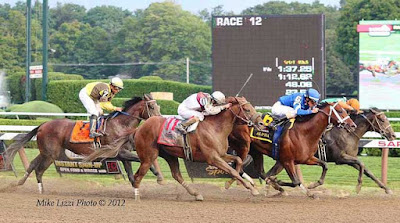 When the Saratoga Racing Association named the Travers Stakes for William R. Travers (one of the founders of America's oldest race course), they sought only to honor a man who'd made his mark on the sport of horse racing. Mr. Travers' horse, Kentucky, won that first in 1864.

Almost immediately, the Travers became a prestigious event, as word spread that the race was designed for only extraordinary three-year-old horses. The race has been run at four different distances during the course of its history to-date:


The Travers creates memories every year, for thousands of people. Too many wonderful experiences to recount here, but some of those memories that have been shared by large numbers of race fans:
Point Given, a gorgeous, big, 17hh monster, won the Travers on August 25, 2001. That day, Point Given drew a record Travers Stakes Day crowd, 60,486 fans. The race brought in a total betting handle of $34,529,273. This was also a Saratoga record to that date.  Read more at source

For the past five decades the canoe floating in the infield pond at Saratoga is painted with the winner’s colors. In 2012, a dead heat resulted in the colors of Alpha and Golden Ticket being represented, with a second canoe added for the historic milestone. 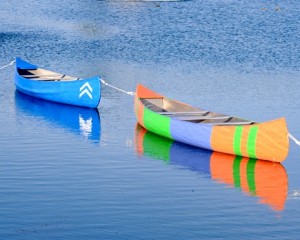 After a race has concluded, return here and click on the CARD for a race replay from BloodHorse. About a 20-minute time delay. 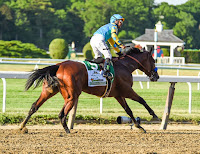 
Interview with Zayat on decision to go to Saratoga


RACHEL'S KIDS MAKE THE GRADE ON THE TRACK AT SARATOGA! Curlin's boy and Bernardini's daughter winners on debuts!