Let's Go To The Races - Oct 1-2, 2016
This is a non-commercial blog - Started as a convenience to organize my race viewing 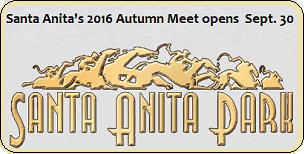 Not a race, it's a monument!

With no fewer than 17 Grade or Group 1 races this weekend, including 5 at Santa Anita, 3 at Belmont Park, 1 in Japan, 1 in Australia, 7 at Chantilly for Arc weekend, it will be a challenge to even watch replays of some of these contests. Robert Kieckhefer with UPI has kindly summarized the whole ball of wax for us, and for the wrap-ups for both days I can highly recommend the Thoroughbred Daily News (www.thetdn.com) which will provide details on all the results for both the U.S. and around the world, which coverage includes great video replay links. This will be the biggest collection of Grade and Group 1 activity outside the upcoming Breeders Cup in November!

Here you find a list of all the races with links to check the cards and my printable time ordered list of races and entries for many of the contests. There will also be some TV coverage, for those with access to NBCSN, TVG, and live streaming will be available via TwinSpires.com, XBTV.com.


First stop though is Robert Kieckhefer's column, out today for an overview.  UPI Weekend Racing Preview

Ride the Course of the Arc!

Japan gets ready for the Arc with Makahiki
Jockey Yuichi Fukunaga :"Victory in the Arc de Triomphe is the dream of Japan and goal of the Japanese people."  Orfevre finished runner-up in both 2012 and 2013, the first defeat by unconsidered outsider Solemia producing this piece of YouTube gold. Now that's pain.

Not to be daunted though, the next challenger steps up to plate on Sunday, and according to some, Makahiki represents the country's best-ever chance of success - and considering how close the likes of El Condor Pasa, Nakayama Festa and Orfevre came, this is clearly a matter for any self-respecting punter to be considering closely. Read more at source

*****************************
TDN: Through Highs and Lows, Dettori endures
"I didn't really understand what had happened until I opened the door to pick up the newspapers the next morning, wearing a T-shirt and underpants, and found four cameras and 10 journalists waiting there," he says. "It was my Rhys Ifans moment, in [the film] Notting Hill. Then when I opened the papers I found I was all over the front pages. The bookmakers had lost 40 million, I was moving the stock market, there were punters making millions It was only then that I understood what I'd achieved."  Read more at source

2015:  Golden Horn, ridden by Lanfranco Dettori, took the laurels in the year’s most prestigious horse race in front of 60,000 racegoers.

Day in History:  'Magnificent Seven' Heaven Sent for Proud Frankie Dettori   "Myself, Willie Carson, Alex Russell and Sir Gordon Richards had now won six in a day. In 320 years of horse racing I was one in four." Then No. 7 happened and he sat above all the rest! Sept. 28, 1996, Frankie Dettori, ran the table at Ascot and broke a record with 7 wins in one day.

Handicapping Arc Day
Breeders Cup Challenge races
************************************
Once a race in the U.S. has concluded, return here and click on CARD for replay. In some instances replays may be available for the international races at those CARDS. For detailed results, be sure to check out www.thetn.com the day following each day's racing action. TDN provides comprehensive write-ups along with high-quality video replay links.

Other replays can be viewed at the CARDs below for U.S. races. Also:  http://www.thoroughbreddailynews.com/race-replays/
FEATURED RACES

RESULTS
Aidan O'Brien and Ballydoyle make it a family affair 1-2-3 and GALILEO sires the lot!!! 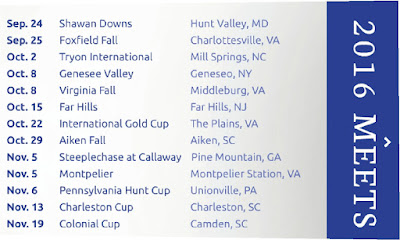 Racing's other Chrome making a name for himself

The impending showdown in this year's Breeders' Cup Distaff (G1) has Ed DeRosa drawing comparisons with the 2002 renewal.

Vance Hanson has several takeaways from Super Saturday I, comparing California Chrome's winning style to Swaps and thinking Stellar Wind might want to take a peek at the Breeders' Cup Classic (G1).

Noted handicapper Michael Beychok prevailed in the Breeders' Cup's Bet Like No Other wagering promotion over the weekend with several astute plays.

Found tops O'Brien trifecta in Arc de Triomphe
Breeders' Cup Turf (G1) queen Found added another feather to her cap on Sunday when leading home an Aidan O'Brien-Galileo trifecta in the Prix de l'Arc de Triomphe (G1) at Chantilly in France. Just in behind the talented four-year-old were stablemates and fellow Coolmore-owned Highland Reel and Order of St. George.

Scott Shapiro discussed who he thought were the winners and losers on Santa Anita Park's Breeders' Cup Challenge Saturday.