Let's Go To The Races - Nov 24-27, 2016
This is a non-commercial blog - Started as a convenience to organize my race viewing 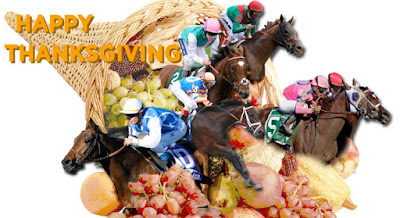 Juveniles will also be in action at Aqueduct in other Derby and Oaks preps. Takaful will try and make it two-for-two in the Remsen (G2), while trainer Rudy Rodriguez has a three-pronged challenge in the Demoiselle (G2) for fillies.

The feature at Aqueduct on Saturday is the $500,000 Cigar Mile (G1), led by one-turn mile specialist Anchor Down and Pennsylvania Derby (G2) winner Connect. Lewis Bay heads the Comely (G3) for three-year-old fillies.

Japanese invader Nuovo Record is looking to rebound from a lackluster Breeders' Cup try in the Red Carpet (G3) at Del Mar on Thanksgiving Day, while Ashleyluvssugar is the one to fear in Friday's Hollywood Turf Cup (G2) at the seaside course.

Not This Time retired, withdrawn from KDFW Pool 1
Leading two-year-old Not This Time, a close second in the Breeders' Cup Juvenile (G1), was unexpectedly retired on Monday to stand stud at Taylor Made Farm Monday after suffering a soft tissue injury. The colt was an immediate withdrawal from the Kentucky Derby Future Wager (KDFW) Pool 1, which will be held November 24-27. The Mutual Field was made the 5-2 morning line favorite, followed by likely champion Classic Empire at 8-1.

Meanwhile, the Kentucky Derby Sire Future Wager has Tapit as the 10-1 top individual choice. The wager will be offered only once, from November 24-27.

At Aqueduct on Turkey Day, Stallwalkin' Dude will be favored to take the venerable Fall Highweight H. (G3) under a 134-pound impost, while Green Gratto seeks to become the first male every to win the century-old race twice.

On Thanksgiving Eve, racing fans can feast on lots of stakes action at Zia Park and Penn National.

From the weekend, Kellie Reilly recapped the final local preps for the Hong Kong International Races, as well as Mastery's comfortable victory in the Bob Hope (G3) at Del Mar.

Don't forget, after a race has concluded, return here and click on the CARD for a replay, about a 10-15 minute delay.


JAPAN CUP - Preview
Twenty one horses are in line for the big event this week at Tokyo Racecourse and 18 of them will be taking their places in the gate come Sunday. It is the 36th running of the Japan Cup, an icon of international color and now the richest horserace in Japan.

This year, the JRA has boosted the bounty yet again, with a Japan Cup first-place catch now up 50 million yen from last year to an incredible 300 million yen. The total purse has been raised to 624 million yen.(approx. $5.2 Million US).

This year, three horses from abroad have made the trip to Japan, two of them repeaters, all of them Grade 1 winners. France once again fields Erupt, and Germany fields two runners – first-time participant Iquitos and Nightflower, looking to better her 11th-place finish of last year.  More at source