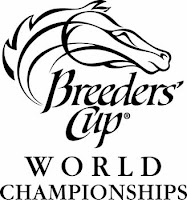 BREEDERS CUP INFO ON A RACE BY RACE BASIS FROM TWO GREAT SOURCES:

Daily Racing Form
DRF's Breeder's Cup site with the probable field, odds by Mike Watchmaker, comments by Jay Privman.  There is a link for each of the races, the EARLY ODDS, the PROBABLE FIELDS, and many VIDEOS by the top handicappers with the DRF
DRF: Breeders Cup World Championships - Churchill Downs

Below are links to articles leading up to the Breeders Cup, and other significant races, including the Melbourne Cup:

DRF: Twirling Candy retired!
So You Think on course for Breeders' Cup Classic
"He could have won three Cox Plates but [we] wanted to take on the world," Chin Nam told the Sydney Morning Herald.  He has showcased Australian racing to the world and showed that we can match them. It has taken two course records to beat him [in his last two starts]. I hope he can go better in America."
Breeders Cup: Mr. Commons & Harmonious prep for Shirreffs
TTimes: Union Rags on target for BC Juvenile
TTimes: Big Drama preps for BC Sprint