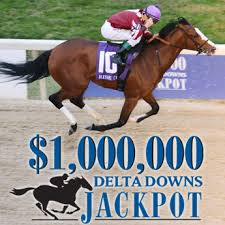 DELTA DOWNS JACKPOT DAY
The Delta Downs Jackpot is the centerpiece of an 11-race program that will feature eight stakes races, two graded stakes and more than $2.3 million in total purse money.
Mr. Z, who hails from the barn of Hall of Famer D. Wayne Lukas, has been installed as the 5-2 morning line favorite for the 12th running of the track's signature event. Fifth in the Breeders' Cup Juvenile most recently, the Malibu Moon colt has finished second in three graded stakes this year, including the Grade 1 Breeders' Futurity at Keeneland two starts back. Paco Lopez will pick up the mount. Read more at source

﻿
STARS COME OUT FOR THE HONG KONG TRIALS 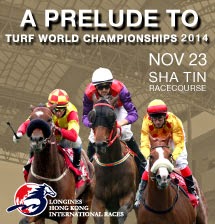 From TDN:  The three most recent Horses of the Year in Hong Kong, as well as almost every other important horse in the region, will prep for the Longines Hong Kong International Races in Sunday’s course-and-distance trial races at Sha Tin, a program sponsored by BOCHK Wealth Management.

In the G2 Jockey Club Cup over the 2000 meters, reigning Horse of the Year DESIGNS ON ROME (Ire) (Holy Roman Emperor {Ire}) will look to move forward off an eighth-place effort behind 2012-13 Horse of the Year MILITARY ATTACK (Ire) (Oratorio {Ire}) in the Sha Tin Trophy H. Oct. 26, where he finished a one-paced eighth as the even-money favorite. Last year’s Hong Kong Derby and G1 Queen Elizabeth II Cup winner had some things against him, however, as the 1600-meter trip was shy of his best and the pace never materialized, blunting his normally strong finish. To be fair, Military Attack is also best over 10 furlongs, and, despite racing first-up in the Sha Tin Trophy, carried Zac Purton to victory at 13-1. He should come on for the effort while trying to save something for the big day in a little more than three weeks.

The race has also attracted two-time G1 Hong Kong Cup hero CALIFORNIA MEMORY (Highest Honor {Fr}). In the Jockey Club Mile, GOLD-FUNGold-Fun (Ire) (Le Vie dei Colori {GB}) and one-time HOY AMBITIOUS DRAGON (NZ) (Pins {Aus}) will square off looking to improve on their second- and third-place finishes in the Sha Tin Trophy last time out. Gold-Fun was runner-up in last year’s G1 Hong Kong Mile, while Ambitious Dragon, winner of the latter event in 2012, was having his first run for 18 months after nearly being retired with a tendon injury. If either of those stub their toe, ABLE FRIEND (Aus) (Shamardal) should be there to pick up the pieces.