Congratulations to the HKIR winners!  Summary of races, photos, etc.

John Moore, an accidental kind of trainer
Some insights into Hong Kong racing and why it's considered the envy of every other racing jurisdiction in the world.

Pre-race coverage: The Longines Hong Kong International Races, also known as the Turf World Championships, have become recognised in this millennium as one of the pre-eminent race meetings of the world alongside Royal Ascot, the Arc Day, the Melbourne Cup, the Breeders' Cup and the Dubai World Cup.

The Longines Hong Kong International Races meeting is one of the most important fixtures for the world's leading horses, jockeys, trainers and owners. Tens of thousands of racing fans from around the world are attracted each year to Sha Tin for this premier Hong Kong sporting event.
One reason is the prize money: a colossal HK$83 million (about $11 Million USD) divided between the four International G1s.

The Longines Hong Kong Cup was originally run as the Hong Kong Invitation Cup on 24 January 1988 when overseas entries were restricted to those from Malaysia and Singapore. Since then the number of countries and regions competing has increased significantly to include Australia, Denmark, France, Germany, Great Britain, Ireland, Italy, Japan, Macau, New Zealand, South Africa, the United Arab Emirates and the United States of America. The LONGINES Hong Kong Mile, Longines Hong Kong Vase and Longines Hong Kong Sprint were added in subsequent years to create the 4-race world event we have today.

Recognized as the “Turf World Championships”, the Longines HKIR races offer some of the world’s richest race prizes while attracting the world’s leading horses, trainers and jockeys to compete here annually.

There is a 13-hour time difference between New York and Hong Kong, so The Hong Kong Cup, Sprint, Mile, Vase are the 4 main races for the day with a post time at 1:00 a.m. EST Sunday for the Vase (Race 4). I watch these races on TwinSpires that live streams the races, in English. You do have to set up an account, however, you do not have to bet, and you will love the interface. There are other services I'm sure that will air coverage, including I believe HRTV, and check with TVG to see what they will do.

TDN: 'Power' to attempt to go one better in Sprint
Earlier this week, Sabena Power’s Sole Power (GB) (Kyllachy {GB}) was named the Horse of the Year in Ireland. This coming Sunday, the 7-year-old will look to improve off a runner-up effort in last year’s G1 Hong Kong Sprint. 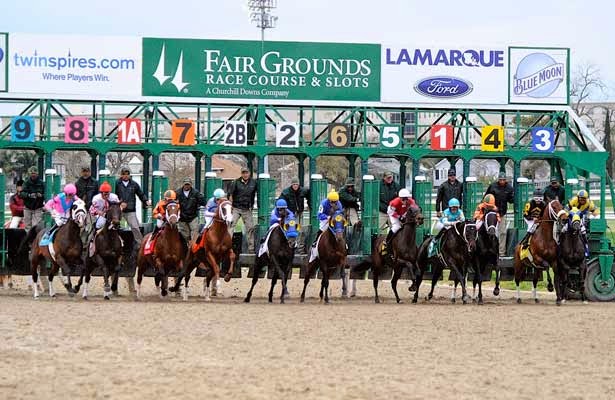 It's LOUISIANA CHAMPIONS DAY!
FAIRGROUNDS
SUNBEAN has a chance to raise his earnings to over $1Million

Brittlyn Stable’s Sunbean will look to become only the sixth millionaire in the history of Louisiana-bred thoroughbreds on Saturday when the 4-year-old gelding defends his title in the $150,000 Louisiana Champions Day Classic against 4 other charges.  If he does so, it will be his third added-money victory in just six weeks.

“He’s doing really good right now,” said trainer Ron Faucheux.  “We have every reason to run him.  He’s training really well and we can probably give him about two months after this to freshen him.  We’re going to go for it.”  Read more
LOS ALAMITOS
Take Charge Brandi wires field in Starlet - Video embedded

A couple of races for two year olds:  the G1 STARLET on Saturday for 2 year old fillies, and the KING GLORIOUS on Sunday for 2year old colts.  D. Wayne Lukas' Breeders Cup G1 Juvenile Fillies winner and recent winner of the G3 Delta Downs Princess, TAKE CHARGE BRANDI is entered in the STARLET on Saturday.

Matt Bernier and Dan Illman handicap the STARLET, with this being TAKE CHARGE BRANDI'S push for end of year honors. She faces some good competition in FEATHERED, who has shipped in to challenge Brandi's position atop the Juvenile fillies division.

Index of Races with links to cards

Note:  For the Hong Kong races, click on each card above, where you will find loads of info for each horse, including track videos of recent workouts.  Along the horizontal tab at the site, slick on "Results" and you will have access to the Multi Angle Replay once the race has completed.