UPDATE:  Coz is last in first time out, but there were some positives that came out of the experience.  ﻿ 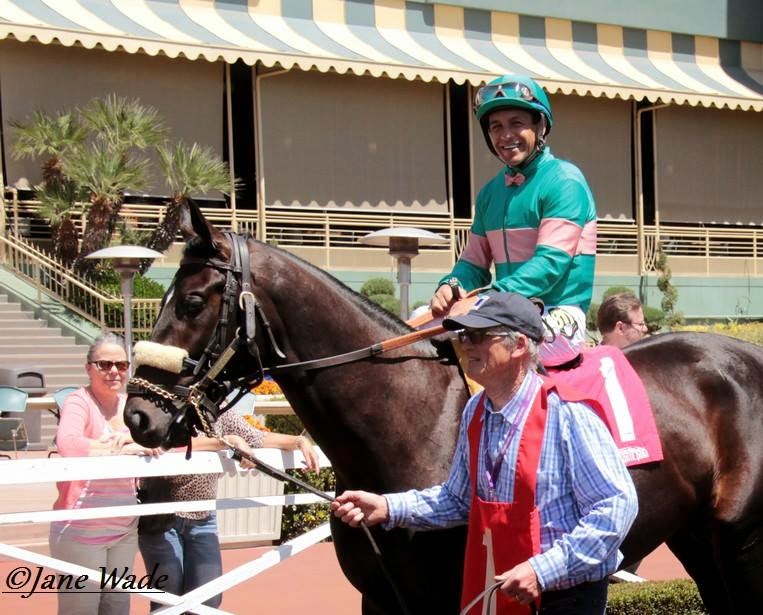 The day before he raced, fans watched training videos of him acting up in the gate, lashing out at John Shirreffs, his trainer.  Everyone was very concerned as to whether he was really ready to race.  John spent several hours Thursday before he raced "schooling" in the gate, and those lessons evidently paid off, because on race day, while he was fractious in the saddling area, once Victor Espinoza, his jockey, climbed on his back, he settled down and was as good as can be.  The stewards gave him permission to have the rider up from the paddock, and he proceeded nicely to the starting gate, loading and then waiting for the rest of the field to complete the lineup in the gate.  Read BloodHorse write up here  Horse Racing Nation write up  Race Replay here  Several people who posted reminded us that Coz' daddy and his granddaddy both finished 4th in their first time out, with chart comments that gave no indication as to their talent they displayed later on.  He is now expected to be shipped with John to Belmont in New York for the upcoming season there.  View race chart  Brisnet write-up

When the dark bay colt first arrived at Belmont Park to begin training, his endless, pent-up energy could not be subdued.

"In order for us to even handle him, we had to put a lot of miles on him," Shirreffs said. "I never had a 2-year-old I trained more than Cozmic One and that was just to handle him. That wasn't even beginning to think about the lessons he would have to learn (to race him). It was in order to just hot walk him to get the edge off."  Read more      Cozmic One Facebook Page - click here
Patience key for Shirreffs with Cozmic One   Cozmic One approaches long-awaited debut  Cozmic One Ready for Debut - TDN 4-16-15   Zenyatta's first foal readies for debut - Brisnet 4-16-15
﻿﻿

To watch replays of completed races, click on the CARD below for a particular race for the BloodHorse replay.

MY MISS SOPHIA SCRATCHED FROM DOUBLEDOGDARE at Keeneland!
My Miss Sophia debuts for Doubledogdare