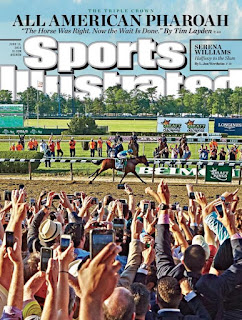 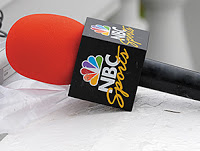 ﻿
Videos interviewing Bob Baffert where he basically just talks about the horse like a fan!
Baffert: American Pharoah's a baby and a beast

"To me, I feel more pressure training him now. I feel like wrapping him in bubble wrap.
"What I want to do is just want to share him with everyone. When we go back to California they'll probably have something for him there and then when we go to Del Mar, they'll have something for him there.  "I wish I was around Secretariat. As a kid, I would have loved to pet him and touch him and get close to him. I got to go up to him and touch him and I'll always remember greatness like that. "I'm his trainer but at the same time I'm like a little kid. I knew he was great but he really had to show it."


Beholder returns to action in California while Belmont Park and Santa Anita both have important grass mile races.


Churchill Downs
The $500,000, GRADE I STEPHEN FOSTER is the highlight of the Churchill Downs post-Derby season and, fittingly, Triple Crown-winning trainer Bob Baffert will saddle one of the favorites for Saturday's renewal, Hoppertunity. The 4-year-old colt by Any Given Saturday won the Grade I Clark Handicap over the course last November but finished third -- behind Shared Belief and California Chrome -- in his last outing, the Grade II San Antonio on Feb. 7. He has been working well at Churchill Downs for his comeback. It won't be easy. Rivals include Dubai World Cup third-place finisher Lea, dual graded stakes winner Commissioner and a rapidly improving Noble Bird.


As if that weren't enough for Baffert, his charge Fame and Power seems to stand head and shoulders over seven rivals in the $100,000, GRADE III MATT WINN 3-year-olds at 1 1/16 miles on the main track. The First Defence colt ran a good third in the Grade III Lexington at Keeneland two starts back, then returned to win the Sir Barton Stakes at Pimlico. Bold Conquest was third in the Sir Barton and seems to be improving but would have to make up several lengths to catch Fame and Power.
The $200,000, GRADE II FLEUR DE LIS HANDICAP for fillies and mares drew a field of nine to tackle 9 furlongs on the main track. Sheer Drama and Gold Medal Dancer bounce back from their second- and third-place finishes in last month's Grade I La Troienne over the course. My Sweet Addiction exits a victory in the Grade I Vanity at Santa Anita. America, Yahilwa, Tiz Windy, Pearl Turn and Frivolous all have credentials for this.


Seven 3-year-old fillies are on board for the $100,000, GRADE III REGRET STAKES at 9 furlongs on the turf. Lady Zuzu, Return to Grace and Don't Leave Me seem best equipped although recent Arlington Park maiden winner America Mon Ami is coming along.


Turf Mile
Bal a Bali and Talco finished 1-2, separated by just 1 length, in the Grade III American Stakes last month and they are back for Saturday's $400,000, GRADE I SHOEMAKER MILE at Santa Anita. Also on tap in the five-horse field is Winning Prize, who finished fourth in the American after a very slow start. Midnight Storm has won three straight races, including last summer's Grade II Del Mar Derby. Seek Again won the Grade I Hollywood Derby two years ago and has had some good moments.


Distaff
Two-time Eclipse Award winner Beholder returns to action Saturday at Santa Anita in the $100,000, GRADE III ADORATION STAKES going 1 1/16 miles against a half dozen foes. The 5-year-old Henny Hughes mare missed the chance to defend her Breeders' Cup crown last fall with an ill-timed illness. She won her comeback race in convincing fashion in April and has been working fairly steadily since then for trainer Richard Mandella. Warren's Veneda has been racing with distinction at the top level and is dangerous here if Beholder isn't yet fully cranked. The others appear to be more allowance types.


France
Queen's Jewel, undefeated in three starts including the Group 1 Prix Saint-Alary last month, is among 18 still in for Sunday's GROUP 1 PRIX DIANE-LONGINES at Longchamp. Many of these have shown talent and the race should be hard fought. Queen's Jewel, a Pivotal filly trained by Freddy Head, will have Maxime Guyon up seeking her fourth and most important victory. John Gosden sends out Star of Seville, who had a three-race winning skein snapped when she finished ninth in the Oaks at Epsom in her last start. Sound of Freedom finished second against colts in her last outing, the Group II Derby Italiano. Katania steps up after three wins against lesser foes.

Dick Powell's Belmont wrap
"Winning the Triple Crown has to be an amazing achievement and to do it three years after lying in a hospital bed in Dubai from a major heart attack has to be even more remarkable."

"As he has shown many times, once he makes the lead, American Pharoah will switch off and use his cruising speed for as long as he needs to. Whatever doubts I had about the dam-side of his pedigree were more than offset by his ability to cruise along and conserve energy. Maybe in a fast-paced race, genetic deficiencies would be exposed, but not on Saturday."

"California clocker Gary Young said before the Derby that American Pharoah was the best horse he had clocked in 35 years. Many scoffed at his opinion and dismissed it. Now, it shows that Young was right all along. I give him a lot of credit for going out on a limb like he did. There was no equivocation in what he said and he looks like a genius now."