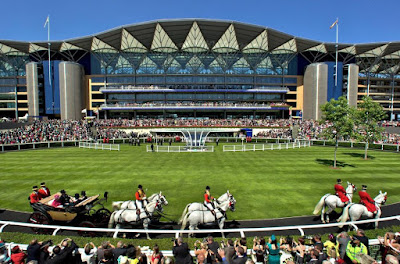 
ROYAL ASCOT 2016 - All you need to know about the week's racing at Royal Ascot. This link has news, links to race cards, odds, results, and more!
﻿

ROYAL HEROINE - TEPIN!
Tepin A Reminder of Why We Love Horse Racing
By Craig Bandoroff in June 16, 2016 TDN

"She is raced by a couple who have raced horses for over 30 years and truly understand the incredible gift they have received. It was a great sportsman’s challenge to take Tepin to Royal Ascot. That was acknowledged by everyone. I have never heard Robert or Joan in public or private ever say anything but “It’s about Tepin, we are merely her custodians.”

"But aren’t we all glad Robert and Joan stuck to their dream and their plan? I know in the last hundred yards when I saw her stride shorten, her head come up a touch and her ears go back even flatter on her head, that I was watching an elite athlete reach down a little deeper, a little further and seem to say to her worthy adversary, “not today big boy, not today.” It’s like she said to us all, you want to know why you love horses, why you love horse racing? Here’s why. Greatness doesn’t come around very often. That’s what’s so great about it." Read more at source

ANOTHER ROYAL HEROINE - LADY AURELIA!
Lady Aurelia romps in the Queen Mary - Stunning performance - Video
Lady Aurelia stuns Ascot in Queen Mary
"LADY AURELIA put up one of the most devastating displays seen in modern times at Royal Ascot when blitzing to seven-length win in the Group 2 Queen Mary Stakes.

"The US raider did not see any of her 16 rivals when making all in the hands of Frankie Dettori to give Wesley Ward a third win in the 5f juvenile fillies feature.

"Despite doubts about the draw and the ground, Lady Aurelia travelled strongly throughout and had the race in the bag even before kicking in the turbo at the furlong pole to streak away from French runner Al Jahrah.

"The success was the second in two days for Lady Aurelia's sire Scat Daddy who was also responsible for Caravaggio, winner of the Group 2 Coventry Stakes."  More at source

WESLEY WARD STABLE TOUR - click here
"Wesley Ward became the first U.S-based trainer to saddle a winner at the prestigious Royal meeting when he scored a double in 2009.

"He has gone on to win a further four races in the last three years, including a brace in 2015 courtesy of Acapulco and Undrafted, who are both back for more glory this year.

"Ward, 48, a former champion apprentice rider in the U.S, returns to Royal Ascot with seven scheduled runners in 2016."

﻿﻿Information will be added daily. Links for a particular day are updated the night before. You can tell if a section has been updated if it is in "bold".

Note: Times posted at the ATR site are GBT. These have been converted to EDT (New York) time below. 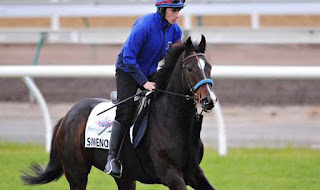 I would like to pay special tribute to a very special horse running in the Queen Alexandra Stakes on Saturday. His name is Simenon, a hard knocking horse if there ever was one. He doesn't have a stellar racing career, having started 42 times (35 in the flat) and finding the winner's circle only 7 times, with 4 places and 6 shows, and winning in US Dollars just over $803,000.  Not bad, especially when you consider that he has assembled this record racing all over the world:  GB/IRE/ AUS/ JPN/ HK/UAE. His best achievement as far as graded stakes is probably in the Grade 1 Gold Cup in 2013, when he came in second behind the Queen's horse, Estimate.

But one of his most remarkable achievements occurred during the year of Frankel and Black Caviar's appearances at Royal Ascot in 2012. But for those two stars grabbing all the headlines, what Simenon did at Royal Ascot that year might have put him in a bigger spotlight. He forever endeared himself to me, though. On the first day of Royal Ascot, Simenon ran and won the Ascot Stakes, a 20 furlong affair, which is about 2.5 miles. Then, 4 days later, on the last day of Royal Ascot, he again ran and won the Queen Alexandra Stakes at 21.5 furlongs, about 2.7 miles! He is a true stayer of the old school!

So, on Saturday, in the final race of this year's Royal Ascot, at the grand old age of 9, Simenon will go to post in the Queen Alexandra.  TimeForm has picked Oriental Fox, but they give Simenon some respect at 12/1 with a chance to hit the board. Good luck, brave warrior! I will be rooting for you, and as always, please come home safe!