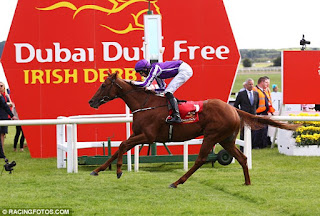 The Gold Cup at Santa Anita, the Ohio Derby and a trio of 7- furlong sprints top the weekend's list of U.S. races.

On the international front, trainer Aidan O'Brien has four of the nine starters IRISH DERBY -- but maybe not the favorite. And Duramente will be looking for a dominant victory in Japan to ease the bruised egos left by A Shin Hikari's defeat at Royal Ascot.


A heavyweight field of 18 is set for Sunday's Grade I TAKARAZUKA KINEN at 2,200 meters over the Hanshin course. The group is headed by Duramente, second in the Group 1 Dubai Sheema Classic at Meydan on World Cup night after losing a shoe and winner of the Grade II Nakayama Kinen the month before that. After the disappointment of A Shin Hikari's lackluster performance in the Group 1 Prince of Wales's Stakes at Royal Ascot last week, Duramente could figure more prominently in Japan's international campaign during the rest of the year. Read more at source

Preview  Kitasan Black and Duramente are probably the two most recognizable names in the field.   The lineup  however, includes others covered in the Preview. With the race running in the early morning hours of Sunday in the U.S., a replay may be the best way to watch the race. Here is a link to the Japan web site where the race will be posted once completed. On Monday an English version will be available.   http://japanracing.jp/en/index.html