Skip to bottom of blog for full results & replays, race by race 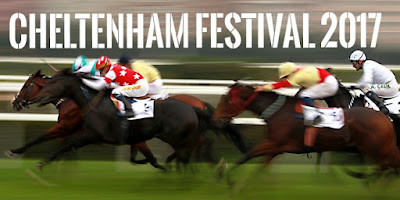 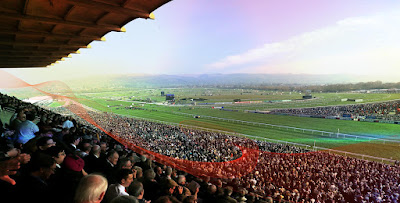 ATR CHELTENHEIM GUIDE - Click here
The above Guide is your key to getting the most out of your Cheltenham experience. Even if you can't watch the races 'live', replays will be available shortly after a race is concluded. Experiment with the replay sites below to see which works for you.
ATR Race Replays
Cheltenham videos & replays
Jockey Club video and replays  <====   Best replay site
More from the Jockey Club
Racing UK Videos

Where to watch live in U.S.
TVG TV and live stream
TwinSpires
Once you click on the ATR Cheltenheim Guide above, focus on the Cheltenham Race Centre on the right hand side of your screen. No matter where are at the site, the Race Centre is always present in the same place. There are other views of the days races, but I have found it is simpler and easier to use this as my 'default' access for race card info.

Runner Profiles - Click here  Also, for some of the important races accessed at the Race Centre look for the tab called Runner Profiles  giving you up to the minute info for runners in that particular race.
PRINTOUTS  Whenever you are looking at a race card, scroll down until you see "Printouts" tab, click on that, and select either ATR Racecard "Standard View", or ATR+Timeform "Standard View" (my preferred format).
CHELTENHAM 2017 - SYNOPSIS

Note: This section is in progress - check back frequently for more details.)

Runner Profiles - Click here  Also, for some of the important races accessed at the Race Centre look for the tab called Runner Profiles  giving you up to the minute info for runners in that race.

Thistlecrack, Douvan and Vroum Vroum Mag - will be highly fancied to strike glory again while the likes of Altior, The New One, Cue Card and Unowhatimeanharry, Un De Sceaux are among the biggest names who could gives the bookies a torturous week.

After 12 months of twiddling your thumbs, The Festival is back and Champion Day is a fitting way to start proceedings with seven nail-biting races to enjoy. The unique first day atmosphere, and hearing the famous Cheltenham Roar, makes this one of the sporting highlights of the year.
Annie Power suffers leg injury - news article

ABIGAIL ANDERSON'S NOTES
Look for Abigail's comments and insights the day before each race.

Race # 1: Novices’ Hurdle
These are all newbies, but I’d keep my eye on MELON + BUNK OFF EARLY (Mullins’ yard); BEYOND CONCEIT + RIVER WYLDE (Henderson yard) and Nigel Twiston-Davies’ BALLYANDY.

Race #2: THE ARKLE (featured race)
ALTIOR is the prohibitive favourite in a smallish field of horses, but SOME PLAN could give him trouble.

Race #4: STAN JAMES CHAMPION HURDLE (best race of the “featured”)
This should be the most anticipated race of the day, because champions abound in here. Among the best of them: THE NEW ONE (my pick), WICKLOW BRAVE, PETIT MOUCHOIR (could be a serious threat) + MY TENT OR YOURS (brave campaigner but probably passed his prime). YANWORTH (McManus), FOOTPAD (Mullins yard & Ruby Walsh rides) and the very hot – in terms of wins – BUVEUR d’AIR (Henderson yard) round out the most promising.


Race # 5: MARES HURDLE (featured race)
Without the likes of ANNIE POWER, I don’t see much to crow about here. Nicky Henderson brings 2 hot numbers in BEWARE THE BEAR + BELLS N’ BANJOS. Joseph O’Brien has EDWULF & she seems a nice filly but no monster of a champion. CALLETT MAD is always first or second and might go for gold @ Cheltenham.

Day 2 – Ladies’ Day
Wednesday is Ladies’ Day, with ‘dress to impress’ as the motto of the day. Whether it’s an extra feather in your hat, the highest heels in your wardrobe or, for the men, a generous dose of tweed, it really is an occasion to savour.

A Look Back: The story of the ‘Comeback King’; Sprinter Sacre is not any normal horse and the horse known as the ‘Black Airplane’ won the 2016 renewal of the Betway Queen Mother Champion Chase in the most emphatic fashion to mark himself as one of the all-time greats with a scintillating second win in the Champion Chase.  Past champions of the race lined up in one of the strongest fields in decades:  Dodging Bullets – 2015, Sire De Grugy – 2014 and Sprinter Sacre – 2013, but it marked the improbable comeback of Sprinter Sacre that took the day:  Sprinter Sacre wins the 2016 Queen Mother Champion Chase      A Champion Resurrected - video
ABIGAIL ANDERSON'S NOTES
Look for Abigail's comments and insights the day before each race.

1) NEPTUNE NOVICES HURDLE (G1)
Lightly raced NEON WOLF is undefeated and clearly a favourite here. A shout out to BURBANK, a son of the incomparable YEATS, for the Henderson stable, who has always been first or second in his 4 starts. Another YEATS, the mare SHATTERED LOVE has won her last 2. Would not discount LIVELOVELAUGH, BON PAPA or WILLOUGHBY COURT.

DOUVAN is the clear favourite here and he’s managed to drive away the competition that remains after injuries to some of the other stars of the season. But among those who could challenge or even upset: FOX NORTON + GARDE LA VICTOIRE.
3) FRED WINTER JUVENILE HANDICAP HURDLE
All the horses here are 4 year-old beginners and it’s always fun to see who the stars of the future might be! It’s always tough to call this kind of contest simply because these horses are all “works in progress.” Babies of interest include: DIVIN BERE (Nicky Henderson), PROJECT BLUEBOOK (son of Sinndar), and two from the Henderson yard in DOMPERIGNON DU LYS + PERCY STREET (who gets Nico de Boinville up). DREAMCATCHING from the Nicholls yard & LINGER may be sitting on a big one.
Day 3 – St. Patrick’s Thursday

The third day of the Festival celebrates St. Patrick’s Day giving you even more reason to enjoy a pint in the Guinness Village and cheer on the Irish horses.
In 2016 Thistlecrack justified banker status as he bounded away from Irish challenger Alpha Des Obeaux to take the The Sun Bets Stayers’ Hurdle in breath-taking fashion and confirmed his total domination of the staying hurdle division.
ABIGAIL ANDERSON'S NOTES
Look for Abigail's comments and insights the day before each race.


1)      JLT NOVICES CHASE
YORKHILL comes in with the best record, but either TOP NOTCH from the Henderson yard or POLITOLOGUE are the ones to watch. Especially TOP NOTCH who I like over this surface. But no-one conditions their horses for Cheltenham better than Nicky Henderson or Willie Mullins, in my view.

2)      RYANAIR CHASE
This is the BIG race of the day. Impossible not to love UN DE SCEAUX for this one but JOSSES HILL interests me since I know that he wouldn’t be running if Henderson thought the ground wasn’t good for him. UXIZANDRE is also intriguing and comes in with a decent but not exactly brilliant record. EMPIRE OF DIRT is getting kudos from At The Races but I’m not certain about his ability over the Cheltenham course, even though he runs well on firm turf.


3)      SUN BETS STAYERS’ HURDLE
The second BIG race of the day, if for no other reason than so many good horses are running. Given the success over the meet so far of the Fry- Fehilly combo, you have to take the chances of YOUKNOWHATIMEAN seriously. But CLONDAW WARRIOR appears to be staging a modest comeback and COLE HARDEN has had a rough time physically and was beaten once by the favourite but should never be discounted.  Too, there is JEZKI and ZARKANDAR to consider. Can these two veterans mix things up for the favourite?


4)      TRULL HOUSE MARES NOVICE HURDLE
Novice races are always tough to call, but here we might well be seeing next year’s champions in action. I like VERDANA BLUE who is coming in off 2 wins on good-soft in places turf. She should like the going at Cheltenham. ON DEMAND would be my second choice. She’s another that the ground will suit. The rest of the entries have won on soft-heavy ground and although some might be fine at Cheltenham, it’s impossible to know going in.
Day 4 – Gold Cup Day

The 2016 Cheltenham Timico Gold Cup was won is style by the Gordon Elliott trained 9/4f Don Cossack ridden by Bryan Cooper. Pushed into the lead as they approached the last he powered up the hill to win by 4 ½ lengths ahead of the gallant Djakadam and Don Poli, a further 10 lengths behind.
The Timico Gold Cup is one of the most significant Jump races in the season, and nothing can rival the Cheltenham roar as the horses come in.

In the morning you can almost cut the tension with a knife as racing fans gather in anticipation for the Timico Cheltenham Gold Cup – the pinnacle of Jump Racing and a race that every year is guaranteed to provide a story for the history books.
This year British-trained Cue Card could secure the Jockey Club Racecourses’ £1 million bonus if he wins the Cheltenham Gold Cup. Having already won the Betfair Chase and William Hill King George VI Chase earlier in the season, he would follow in the hoof prints of the legendary Kauto Star who won the treble both in 2007 and 2009.
A Look Back:  Last year Coneygree, on only his fourth race over fences (as opposed to hurdles which are smaller), dominated the race from the front to take an emphatic victory for his owners.
Gold Cup Heroes Year by Year

DEFI DU SEUIL is a deserved favourite in what is an arguable strong field. He gets everything right, will love the ground and gets the excellent Richard Johnson in the irons. Others worth watching for: MEGA FORTUNE who took a G1 last time out but may be in above his head in terms of class; Joseph O’Brien’s LANDOFHOPEANDGLORY (High Chaparral) who has lots of heart, a winning trainer in young Joseph and –perhaps – the luck of the Irish; the absolutely brilliant CHARLI PARCS (Anabaa Blue) who has Henderson as trainer and the winning Fehilly as jockey; also from the Henderson yard, SOLDIER IN ACTION, who gets Nico de Boinville – Sprinter Sacre’s rider – as partner. I like CHARLI PARCS + MEGA FORTUNE to give DEFI DU SEUIL some serious competition.

This is a 3 mile run, so you’re looking for skill and stamina here in a strongish field. For me, it’s tough to choose between DEATH DUTY, WHOLESOME and AUGUSTA KATE, who is a daughter of the great YEATS and may only be lower in the betting because she’s a girl, despite the fact that she’s trained by the brilliant Pat Mullins. CONSTANTINE BAY from Nicky Henderson’s yard and THE WORLD’S END are infinitely suited to the ground and can be expected to put in a good show. ANY DRAMA (from the winning Fry-Fehily team) may be well worth watching too.
3)      THE GOLD CUP CHASE (G1)

This is one of the plums of the whole meeting and my heart rides with the gutsy CUE CARD even though I know he’s got his work cut out for him against Willie Mullins’ DJAKADAM who gets Ruby Walsh and NATIVE RIVER from the Richard Johnson yard. I would not discount BRISTOL DE MAI, MINELLA ROAD from Jonjo O’Neill’s yard who gets the very smart Noel Fehily up or SIZING JOHN. If SMAD’S PLACE shows he can improve, he could be a serious threat.

You will find everything you need to know at this link.  http://cheltenham.attheraces.com/
Or, you can click on the CARD below for quick access to the race card.

PRINTOUTS   You can print out individual race cards for just the races of interest to you. Whenever you are looking at a race card, scroll down until you see "Printouts" tab, click on that, and select either ATR Racecard "Standard View", or ATR+Timeform "Standard View" (my preferred format).

RACE REPLAYS   All Cheltenham Festival replays are posted below, also go to  Jockey Club video and replays to search for replays all season by meeting and date.