Zenyatta's first foal is a handful

On this Derby Day, I wanted to pay tribute to a future Derby starter for 2015! At the moment he doesn't have his "stage" name...he is simply known as Z's Prince, or "Z12", or officially in the record books, "Zenyatta12". He is special, and he knows it. 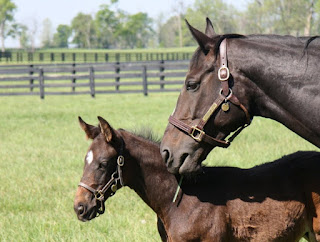 He doesn't know how lucky he is. He will never see the inside of a sale ring, he will know only the best hands God ever made to train a horse. He has the presence that comes from within, transported through his very talented and accomplished Momma, Queen Zenyatta. What fun we will all have watching this little guy grow up, go to his "baby" training at the Mayberrys in Florida, and eventually into the tender and brilliant hands of trainer, John Shirreffs. Eventually, Team Zenyatta12 will add a then 49 year old Mike Smith to ride on 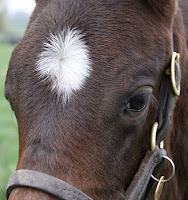 He may never approach his Momma's or his Daddy, Bernardini's, career achievements. It happens that way sometimes: great horses sometimes take generations to have their brilliance show up in their progeny. But, if we are lucky, one day in mid-2014, we might see a little two year old colt with two famous parents standing by while Z12 bounds out of the starting gate into the California sun to fulfill his destiny. He will not lack for friends or fans. We are all here, standing by, waiting for his big day, his first race. And, no matter the outcome, no matter what his destiny turns out to be, he is special, very special indeed.
Born to Run