A Valentine for Rachel ~
February 14, 2011 - updated January 29, 2016
(Note: This was originally published on another blog of mine, which is now inactive) 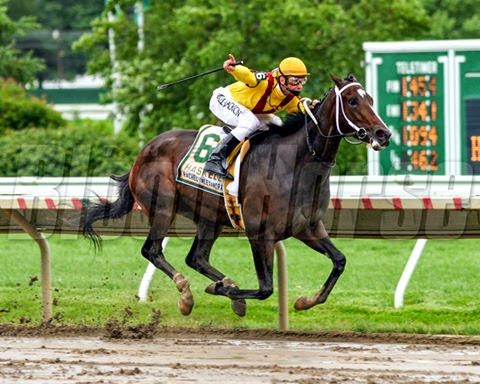 I didn't know who Rachel Alexandra was when I first discovered Zenyatta, but after a while, I decided to check up on her. This was after she had been retired. The more I learned, the more I realized just how fortunate Zenyatta has been throughout her career to have such loving and caring handling in every respect. One thing you have to say about Zenyatta is, her connections kept her happy and interested in what she did. She always brought her best game any time she stepped on a track, she never failed to show up or do what was asked of her, she never took a vacation or a day off from training - nor did she need to!


This is not a "rose colored" Valentine, but a heart-felt love letter to one of the most beautiful, courageous and talented fillies with a remarkable three-year-old season that is not likely to be duplicated any time soon.

What I saw in Rachel's career was, right after she won an important race, her original owner saw an opportunity to cash in.  (Apologies to fans of Mr. Morrison...I realize "it's a business". Nevertheless, it was about the money.)  Her next owner launched her on an ambitious and exhausting campaign, and combined with those she had already run, she wound up starting 11 races in as many months, and winning 9 in a row!

Yes, she ran in several well-respected male-dominated races and 8 others in 11 months, but I have to question at what cost? I watched and cringed at the ride she had in the Woodward.  (For a heartbreaking account of Rachel's Woodward, see a link to Steve Haskin's column at the bottom of this post.) Then, in the Haskell, when she was leading by several lengths near the wire, she was being pushed with the whip to extend for a time record!  It seemed to me that the exhaustive schedule, the aggressive rides by the jockey, all had nothing to do with Rachel’s welfare.

I would love to have seen a different life for Rachel, one that would have allowed her to have a longer career. And what a bonanza for the sport and for Rachel! Imagine the hysteria and the media attention that would have ensued and the benefit to the sport with a few races where Zenyatta and Rachel met over a period of a couple of years. This would have equaled some of the sport's great rivalries: Easy Goer and Sunday Silence, Affirmed and Alydar. Instead, what she got was an owner in a huge hurry to strike while the iron was hot, to push her to the point where I don't think she wanted to see another race track. The fact that her 2010 record wasn't any worse is remarkable.


She's a big, tough horse, but there are physiological differences between male and female horses. They can run against the males and be successful (it's more common in Europe) but it does require a little more patience to condition a filly for this type of racing.

With proper training and some patience, she could have been kept happy and still wanting to go out and run her heart out. Her "connections" didn't have time for that. They chose, instead, to push her to the point of exhaustion, and literally run her in the ground (IMHO). It is remarkable that she remained sound, and something for which we can all be very grateful.  (Note:  It did come out later that Jess Jackson had grave health issues which may have colored the thinking in plotting Rachel's 3 year old campaign.  While I am sensitive to these issues, my concern was that it wasn't Rachel's welfare that went into the decisions made about her.)

She has some remarkable accomplishments, many of which may never be repeated. Brian Zipse, Horse Racing Nation, mentioned that she may have needed a longer rest. Actually, she was off 6 months before she began her 2010 campaign. An even better idea might have been if her 2009 campaign had extended over a longer period. She was spectacular burning up the track and beating the males, but I could have enjoyed it just as much spread over two years!

Maybe that is just the way the sport is. Maybe I'm too "soft". Maybe I don't know what I'm talking about. All I know is, I think Rachel deserved better than she got from those who were supposed to take care of her. I will remember Rachel as a great filly who had the misfortune to fall into the hands of those who represent the grubbier side of the sport. (IMHO!)

Rachel has a wonderful fan following, and to her fans I lift a glass to toast her career and their loyalty! I count myself among those fans, although I only came to know her after she was retired. I've never understood why there seemed to be so much rancor between the fans of Rachel and those of Zenyatta. It is regrettable that a few people fueled this fire, because I know many people who are avid fans of both horses, which is as it should be.﻿


It is my hope and wish that Rachel's foals will get to speak for her in the future to increase her legacy. She certainly was a remarkable filly whose racing career was far too short. Like a shooting star, she was gone too soon.

It will long be remembered in the annals of racing that a remarkable filly named Rachel Alexandra graced the racing stage and burned up the tracks with her speed and talent, shattering records in the process. She is sorely missed.

Update 2016: Rachel had some problems with both of her pregnancies, with the second one threatening her life, and she is not likely to be bred again. However, the two she had are making their way on the track: Jess's Dream (Curlin) (2012) and Rachel's Valentina (Bernardini) (2013) both were named TDN Rising Stars in their debuts. Rachel's Valentina is in training with Todd Pletcher with two workouts posted for January 2016. Jess's Dream was in training with Kieran McLaughlin, but no recent workouts have been posted.  BloodHorse update on Jess's Dream