A quick reference tool meant to help the newer fan (like me!) 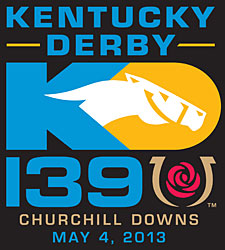 Kentucky Derby field is set, gate positions have been drawn, and Morning Line odds have been determined.  Below are quick links to get up to speed on each horse.

Note:  Check back for updates, including the Oaks and the undercard action Friday and Saturday.

The top two morning-line favorites for the May 4 Kentucky Derby Presented by Yum! Brands (gr. I) both drew fairly well in outside posts when post positions were selected May 1 at Churchill Downs.

The draw was conducted under normal "blind draw" conditions by Churchill Downs' Ben Huffman and Dan Bork. Twenty horses can start in the Derby and 21 passed the entry box. Fear the Kitten is the lone also-eligible colt on that list.

Orb, a homebred for Stuart Janney III and Phipps Stable, is riding a four-race win streak and drew post 16 of 20. The "buzz horse" of the backstretch Derby week was installed the 7-2 morning line favorite by oddsmaker Mike Battaglia.  Read more at source


Kentucky Derby: Orb favorite from post 16; Verrazano to break from 14


Nicole Russo for DRF
LOUISVILLE, Ky. - Florida Derby winner Orb drew post 16 and was pegged as the 7-2 morning-line favorite as the field for the 139th Kentucky Derby was finalized Wednesday evening at Churchill Downs.

As expected, an overflow field of 21 horses was entered for the Grade 1, $2 million Kentucky Derby, which is limited to 20 starters. This year, Churchill Downs implemented a system tallying points in designated races as the tiebreaker if more than 20 enter, scrapping the previous system based on graded stakes earnings. Giant Finish, who was declared as a starter on Tuesday, was the final horse into the main body of the field with 10 points, leapfrogging Fear the Kitten, who has only six points. Last year, Churchill Downs re-instated an also-eligible list allowing up to four horses; Fear the Kitten may run if there are any withdrawals from the main body of the field by scratch time, 9 a.m. Friday.


Many ceded Derby favoritism to Verrazano after the colt remained unbeaten with a victory in the Wood Memorial on April 6. However, support for Orb steadily grew in the week leading up to the race, reaching a fever pitch when the colt turned in an impressive final workout Monday morning at Churchill Downs, cruising four furlongs in 47.89 seconds. Verrazano, who landed post 14 for the Derby, was tabbed as the 4-1 second choice by Churchill Downs oddsmaker Mike Battaglia.  Read more at source

You might also want to check in at Mary Cage's "Past The Grandsand" analysis of the Derby field.  She goes more in depth to discuss each horse's ability to go the distance.  "Past The Grandstand"

Note:  Be sure to use the back button after visiting each link.

REVOLUTIONARY
Post 3, 10-1
Derby profile
DRF profile and video replays
TVG Video profile
Louisiana Derby replay
Revolutionary is a strong candidate for the classic distance, for he stands to inherit plenty of stamina from his dam, 1997 Alabama heroine Runup the Colors. He gets high-class speed from his sire War Pass, the undefeated champion two-year-old colt of 2007. War Pass swept his first five starts, including the Champagne and Breeders' Cup Juvenile, but his Derby hopes were thwarted during the spring of 2008. He retired from racing following his runner-up effort in the Wood Memorial.

Derby profile
DRF profile and video replays
Past performances
Dallas Stewart on Golden Soul - video
Golden Soul should thrive at 1 1/4 miles, but if his pedigree is any indication, he's likely to find his true home on turf. His sire, Perfect Soul, ranked as the Canadian champion turf horse of 2003. Although the son of supersire Sadler's Wells won over as far as 1 3/8 miles, he excelled from a mile to nine furlongs. Perfect Soul especially loved Keeneland, where he landed the Shadwell Turf Mile and came back to set a course record in the Maker's Mark Mile. His two leading offspring are likewise turf aficionados, 2011 Breeders' Cup Filly & Mare Turf winner Perfect Shirl and 2009 Breeders' Stakes scorer Perfect Shower.


Past performances
Normandy Invasion's pedigree is a mixture of speed and residual stamina, offering reasonable hope that the Derby distance is within his compass. He could also receive further heft from deeper in his female line, which descends from 1926 champion Fair Star and has continued to produce quality runners over the decades, including champions Fairy Chant and Parlo and Hall of Famer Arts and Letters. In more recent times, another branch of this line was responsible for 1996 Derby hero Grindstone.

Derby profile
DRF profile and race replays
Past performances
Giant Finish is from the first crop of Frost Giant, a regally-bred son of Giant's Causeway.  Frost Giant scored his two biggest career victories at 1 1/4 miles, in the 2008 Suburban Handicap on dirt and the 2006 Kilternan Stakes in Ireland on turf.

Goldencents' pedigree leaves some uncertainty about his aptitude for the Derby's 1 1/4 miles. He is from the first crop of Into Mischief, a noted juvenile of 2007 who scored his signature win in the CashCall Futurity. During a three-year-old campaign limited by injury, he raced only at seven furlongs, winning a minor stakes at Santa Anita and placing in both the San Vicente and Malibu.
Off to a good start at stud, Into Mischief has also sired Jerome hero Vyjack and top Louisiana-bred filly Sittin at the Bar.  Doug O'Neill on gate draw for Goldencents - video

Post 9, 15-1
Derby profile
DRF profile and video replays
TVG Video profile
Past performances
Overanalyze's pedigree offers some encouragement, without being conclusive, about his distance capacity. He is by Dixie Union, who earned his most significant victories in the 1 1/8-mile Haskell and seven-furlong Malibu in 2000. A few of his top performers have stayed farther than he did -- most notably Union Rags, last year's Belmont winner; Dixie Strike, who beat the boys in the 2012 Prince of Wales; and Grasshopper, close runner-up in the 2007 Travers. Others, like the smart juvenile filly Hot Dixie Chick and turf/synthetic runner Dixie Chatter, had distance limitations.


PALACE MALICE
Post 10, 20-1
DRF profile and race replays
Derby profile
Past performances
Palace Malice is bred to improve with maturity and added distance, so he's a solid candidate to excel at 1 1/4 miles. Moreover, as a May 2 foal with this type of pedigree, he's come to hand more quickly than might have been expected. From first-crop sire Curlin. This is the family of Rail Trip, hero of the 2009 Hollywood Gold Cup in track-record time for 1 1/4 miles.

Derby profile
DRF Profile and Race Replays
DRF - Workouts
Past performances
TVG video profile
HRN's Laura Pugh thinks this horse may prove skeptics wrong
Steve Haskin's "Oh Happy Day" column
Haskin has him at #6 on his latest Derby Dozen, and had this to say: "Even though he just jogged around there, he acted like he owned the place and was strutting along with his neck slightly arched as if he’s been there his whole life. Distance is a slight question, but the talent sure isn’t." Plesa let his charge shake off the rust and get a taste of real competition again. In addition to that he’s been giving Itsmyluckyday routine one mile breezes, over the deep and sandy Calder surface. Plesa has masterfully brought this colt along, training the stamina into him, something other trainers neglect to do.

FALLING SKY
Post 13, 50-1
TVG Profile: TVG video profile
Derby profile
DRF profile and video replays
Past performances
Falling Sky's pedigree is open to interpretation, but doesn't loom particularly promising for 1 1/4 miles. His sire, Lion Heart, held on for a clear second in the 2004 Kentucky Derby after setting the early pace. In his trademark front-running style, Lion Heart also won the Hollywood Futurity and Haskell, and was just nailed late in the Blue Grass.

VERRAZANO
Post 14, 4-1
Derby profile
DRF profile and video replays
TVG video profile
Past performances
Verrazano's pedigree doesn't guarantee that he'll love 1 1/4 miles, but it is laden with quality, and there could well be enough depth and substance to carry him through his distance test. Verrazano will be relying on his dam's side of the pedigree to stretch More Than Ready's speed.


CHARMING KITTEN
Post 15, 20-1
Derby profile
DRF profile and video replays
TVG video profile
Past performances
As a son of 2004 champion turf horse Kitten's Joy, Charming Kitten likely has the stamina, but must answer the dirt question. Kitten's Joy was an emphatic winner of the 1 1/2-mile Joe Hirsch Turf Classic Invitational as well as the 1 1/4-mile Virginia Derby and Secretariat Stakes during his championship campaign. On the plus side, Kitten's Joy has sired a few quality dirt runners, most notably Csaba, whose four-stakes winning streak included the Hal's Hope and Fred Hooper, and Politicallycorrect, winner of last year's Oklahoma Derby and Damascus Stakes.
ORB
Post 16, 7-2
Derby profile
Past performances
DRF profile and video replays


Handicapping video with Dan Illman
TVG video profile
It took Orb 4 tries to break his maiden, and he has been undefeated ever since.  Orb descends from the same female line as 1988 Wood Memorial winner Private Terms, ninth as the favorite in that year's Run for the Roses; 1998 Travers and Haskell victor Coronado's Quest; successful sire Icecapade; and the immortal Ruffian.
Befitting a Stuart Janney III and Phipps Stable homebred, Orb has a strong pedigree for 1 1/4 miles.
Orb is infused with an abundance of stamina from his dam, Lady Liberty, who won over as far as 1 1/2 miles on turf. She is by champion Unbridled, hero of the 1990 Kentucky Derby and Breeders' Cup Classic.

WILL TAKE CHARGE
Post 17, 20-1
Derby profile
TVG Video profile
Past performances
Should be able to handle the Classic distance with strong pedigree

FRAC DADDY
Post  18, 50-1
TVG video profile
Ken McPeek on Frac Daddy - video
Past performances
Frac Daddy has strong credentials for the 1 1/4-mile distance, especially from the maternal half of his pedigree.

JAVA'S WAR
Post 19, 15-1
Derby profile
DRF profile and video replays
Past performances
Java's War has an abundance of stamina from his dam's side of the pedigree, but it's of the turf variety, and he's already indicating that dirt might not be his preferred surface. He is from the first of only two North American crops sired by War Pass, the undefeated champion two-year-old colt of 2007. War Pass swept his first five starts, including the Champagne and Breeders' Cup Juvenile, but his Derby hopes were thwarted during the spring of 2008. He retired from racing following his runner-up effort in the Wood Memorial.

Post 20, 15-1
Derby profile
DRF profile and race replays
Past performances
Vyjack would have to outrun his pedigree to win the 1 1/4-mile Kentucky Derby.  He is from the first crop of Into Mischief, a noted juvenile of 2007 who scored his signature win in the CashCall Futurity. During a three-year-old campaign limited by injury, he raced only at seven furlongs, winning a minor stakes at Santa Anita and placing in both the San Vicente and Malibu.