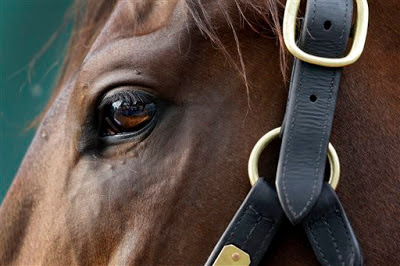 IS ORB "THE ONE"!
Watch all of Orb's races and judge for yourself -- KY Derby, Fountain of Youth, and Florida Derby, as well as his allowance race....slow pace, no pace, fast pace....doesn't seem to matter with this horse. He has started from the rail position to the far outside position (KY Derby - post 16) and from the middle of the field. He's usually mid- to back of the pack for 3/4 of the race, and he makes his move on the back side nearing the turn and he just marches on regardless of who is close to him. He nearly always goes to the outside, which means he is packing plenty of reserves to get the job done. I don't think I have felt as confident about any horse's ability to do whatever it takes to win! He always runs his own race! No one dictates to this horse, and he has never gotten boxed in at the rail or had to fight for position. He makes his own "trip"....he's tough, he has the heart, and he sure has figured out how to win! GO ORB!! He will be carrying the hopes and dreams of millions who have been waiting for "the one"! ORB past performances - scroll down to "Past Performances" & click on video

Jon and Joel review the line up for the Preakness:

PIMLICO
Friday's program features the $500,000, Grade II BLACK-EYED SUSAN with nine 3-year-old fillies set to try 9 furlongs on the main track. Emollient is the 9-5 morning-line favorite off her gate-to-wire victory in the Grade I Ashland Stakes at Keeneland over the all-weather surface. Fiftyshadesofhay comes east after a third-place finish in the Grade 1 Santa Anita Oaks for trainer Bob Baffert.

Friday's $300,000, Grade III PIMLICO SPECIAL will have a variety of running styles in the seven-horse field. Eighttofasttocatch has been well in front in his last two starts with one win to show for it. Last Gunfighter has rolled from off the pace to win five straight at Aqueduct and Belmont.

The $100,000 THE VERY ONE STAKES, a 5-furlongs turf dash for fillies and mares, drew an overflow field of 14 with two also-eligibles. Sweet Cassiopeia is the morning-line favorite off five straight wins but drew gate No. 13.

Saturday's racing in support of the 138th Preakness includes four graded stakes and three others.

The $300,000, Grade II LONGINES DIXIE STAKES at 9 furlongs on the turf has a jam-packed field of 13, many of them with credentials. Optimizer, Willcox Inn, Imagining, Doubles Partner and Swift Warrior all are posted at single-digit odds in the morning line.

The $150,000, Grade III MARYLAND SPRINT HANDICAP drew 10. The morning-line choice, Sage Warrior, drew the outside gate as he steps up in company while trying to win his fourth in a row.

Samitar is the 5-2 favorite in the $150,000, Grade III GALLORETTE HANDICAP, a 1 1/16-miles turf test for fillies and mares. Samitar, one of two in for trainer Chad Brown, won the Grade I Garden City Stakes at Belmont last fall in her first U.S. start but hasn't visited the winner's circle in three intervening trips.


Fillies and mares go 1 1/16 miles on the main track in the $150,000, Grade III ALLAIRE DUPONT DISTAFF STAKES with seven set to face the starter. Summer Applause, Brushed by a Star and Moon Philly are the favorites.


GRADE 1 PREAKNESS STAKES with a purse of $1,000,000.  Orb's rivals on Saturday include Mylute, fifth in the Kentucky Derby, Oxbow, who finished sixth in the Run for the Roses, Will Take Charge (8th), Itsmyluckyday (15th) and Goldencents (17th). Each of them had an excuse -- or two -- in the Derby and could run much better against a smaller field. The weatherman is calling for sunny skies at Pimlico on Friday and no more than a few showers on Saturday so track condition is unlikely to be an issue.


It is noteworthy that none of the top finishers in the KY Derby will run in the Preakness.  Clearly, most expect Orb to rise to the occasion and bring home the Black-Eyed Susans on Preakness Day!  The entire racing community is pulling for the magic of a Triple Crown to happen this year, with this horse, with these connections.

The sport is overdue for some good news, and the journey with Orb, for me anyway, has been very satisfying.  If this is all there is, I'm prepared to accept it and consider myself lucky to have had the glimpse into what big-time racing used to be about.  The connections and the trainer, and the horse, are all worthy of admiration and appreciation for what they bring to the sport.  Icing on the cake will be for Orb to win the Preakness and to participate in the last leg of the Triple Crown at Belmont.  Can Orb win it all?  I think so, but if he falls short, it will not diminish the experience we have had with this horse and connections.  No matter the outcome, this has been a season of pure joy!

HOLLYWOOD PARK
Seven are set for Saturday's $150,000, Grade II MARJORIE L. EVERETT HANDICAP for fillies and mares at 1 1/16 miles on the all-weather track. More Chocolate runs right back after a fifth-place finish in the Grade II LA TROIENNE at Churchill Downs on Derby Day. Before that, she won the Grade II La Canada and finished second in the Grade I Santa Margarita. This is her first time on the all-weather surface. Lady of Fifty has been competitive in local graded stakes. The race is named for the former owner of Hollywood Park, who died last year at age 90. Hollywood Park is set to die at the end of this year, to be redeveloped into commercial and residential properties.

Jeremy Plonk's COUNTDOWN TO THE CROWN - Week 20
Steve Haskin: Final observations on Preakness
Preakness contenders, profiles, race replays
DRF Preakness page - replays of past races
For those who want to see the charts for each of his races, here is Equibase Orb page...click on "results" and each of his races is listed with the charts for each race. Orb - Equibase - click on "results"
Dixie, Gallorette highlight Preakness undercard