With a history dating back almost two centuries, Cheltenham has become synonymous with world class National Hunt horse racing, and from Tuesday 10 to Friday 13 March 2015, hundreds of thousands of people will descend on the Gloucestershire spa town for the world-famous spectacle of The Festival 2015.
Encompassing the internationally-renowned Cheltenham Gold Cup, the four-day event will see more than 25 races take place, with almost £600 million being bet on some of the world’s finest race horses as they speed around Cheltenham Racecourse’s Old Course, New Course and Cross Country Steeplechase Course.
Some of the best and bravest horses and jockeys, nervous and excited trainers and owners, and a wide cast of human characters will once again be uniting, determined to have the time of their lives  Read more
__________________________________________________________
Cheltenham Festival memories and magical moments - The attraction of the 'Greatest Show on Turf'
Gerard O'Donovan in Festival History 3 Feb 2015
Racing expert Gerard O'Donovan gives us his earliest Cheltenham memories and experiences from the Festival and tells us why it's the greatest meeting in the world.
I have been asked many times to explain the attraction of the Cheltenham festival. Although quite obvious to a racing enthusiast like myself, it is difficult to articulate to a 'non-believer'. The craic, the 'roar of the Irish', the poker sessions, the Guinness and the betting, these words spring to mind but do little to illustrate the experience of being at the Cheltenham races.
It might be a cliché but the main ingredient of the festival is the Irish: the Irish horses, the Irish punters and the Irish craic. Racecourse Manager Edward Gillespie has gone on the record as saying the Festival owes its’ success to the travelling Irish faithful.
Many racing observers believe the modern-day Festival began on March 7th 1964. ‘Mill House for England, Arkle for Ireland’, the immortal words of Peter O'Sullevan described the historic battle between two mighty champions representing two great national hunt nations. Read more
__________________________________________________________
Major Races
Champion Hurdle, Queen Mother Champion Chase,
World Hurdle, Gold Cup
For all races for the 4 days, scroll down to Featured Races
CHELTENHAM MARCH 10 - CHAMPION HURDLE: Another showdown looming at Cheltenham will be between HURRICANE FLY and his chief rival, JEZKI. Scheduled for Wednesday, March 11, the Champion Hurdle will surely bring a lot of excitement as these two chief rivals duke it out.

"Last season ended on a disappointing note for the 11-year-old Hurricane Fly when he was beaten at both the Cheltenham and Punchestown festivals by Jezki.

"However, he has left that form well behind this season, getting the be...tter of his old rival Jezki on three occasions, bringing his tally of Grade 1 victories to a record-breaking 22."


Redemption awaits the 11 year old champion for last year's losses. Ironically, so far anyway, the punters do not favor either of these rivals as likely winners. This could very well change as we get closer to the race.

For an in-depth look at Hurricane Fly, one of the super-stars of hunt racing, check out ABIGAIL ANDERSON'S special post:  KING OF HEARTS - HURRICANE FLY
Tuesday, March 10, 2015 - Cheltenham  10:20 a.m. EDT  CARD
Hurricane Fly faces Jezki and 15 others in the Champion Hurdle, billed as a showdown between The Fly and his chief rival, Jezki.
A.P. McCoy to ride Jezki in Hurdle
Mullins: Hurricane my each-way bet of the week
Surely only fast ground can stop Willie Mullins cleaning up at the Cheltenham Festival
Jockey Jamie Moore takes Sire de Grugy and others down to the beach

This will be a showdown between SIRE DE GRUGY and SPRINTER SACRE, although there seem to be some others who will keep the front two honest. Sprinter missed all of the 2014 season after he was pulled up in the Dec. 27 2013 Desert Orchid Chase at Kempton Park with what was later diagnosed as a heart problem. While he recovered fairly quickly, his trainer, Nicky Henderson felt he needed more time before he returned to training. In the race in which he was pulled up, Sire de Grugy was the winner, and has since that time seemed to inherit the spotlight that once was reserved for Sprinter.


When Sprinter returned to the races this January, in the Clarence House Chase, he gained the lead toward the finish but was overtaken by Dodging Bullets, with the notation that he seemed to tire toward the last.


ABIGAIL ANDERSON provided a wonderful in-depth look at SPRINTER SACRE 18 months ago, before a heart murmur sidelined him from competition. Now that he's back, everyone is going to be keen to see if he can regain his pre-injury/health issue form!  HE'S BETTER THAN FRANKEL! SPRINTER SACRE

"I'm in the former camp but it's not something I'm particularly bullish about and, like the Champion Hurdle, it's not a great betting race in my view, although its potential news and drama value puts it right up there in the anticipation stakes. "For what it's worth my gut reaction after his Ascot comeback run behind Dodging Bullets was a positive one as I liked the way he travelled and jumped for most of the race, while unlike the sceptics I'm happy to accept he will come on enormously for the run."

Wednesday, March 11, 2015 - Cheltenham  10:20 a.m. EDT   CARD
RESULT:  Dodging Bullets, Somersby, Special Tiara
Sprinter appeared to run well, but in the stretch, he was pulled up.  Speculation is he will be retired.  His age and the long layoff were against his being able to come back to his earlier form.  He owes no one nothing.  His record speaks for itself. 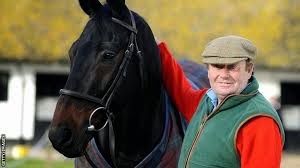 WELL DONE, SPRINTER!  Nothing official as to whether he will be retired, however, it is assumed that is what is ahead. He was truly the very best and was perfect for a long time. He's 9, so was nearing the end of his career. A younger horse might have been able to come back after that illness and long layoff...at 9 it was doubtful at best. We wanted him to be what he once was....and in our hearts he always will be.

CHELTENHAM MARCH 12 -WORLD HURDLE Paul Nicholls's Zarkandar knows what it takes to win at the Cheltenham Festival and the former Triumph Hurdle winner will aim to bag glory in what is a wide open renewal of the Ladbrokes World Hurdle, where he will lock horns with stablemate Saphir Du Rheu, who has returned to the hurdling sphere after a brief switch to fences.
Rock On Ruby is another previous winner having landed the Champion Hurdle before and he will step up in trip, whilst the likes of Whisper, Un Temps Pour Tout and Reve De Sivola add more depth to what is an ultra-competitive renewal of the Thursday showpiece.
Zarkandar  10/1
Saphir Du Rheu  4/1  10/1
Annie Power
Rock On Ruby  10/1

Annie Power, runner-up behind More Of That 12 months ago, is also among the 22 confirmations, but is expected to instead take on her own sex in Tuesday's OLBG Mares' Hurdle. (She ran Tuesday, fell and finished near the back of the field - she appears to be ok.  Very disappointing as she was favored)

Her trainer Willie Mullins is still likely to be represented after also leaving in Abbyssial, Briar Hill, Pont Alexandre, Un Atout and Zaidpour.

CHELTENHAM MARCH 13 - GOLD CUP
Tom Lee from Channel 4 Racing is with us this week and he has made his selection for the Gold Cup; Bobs Worth - to win the Gold Cup

Tom says of Bobs Worth 'Written off after one below par run in the Betfair Chase at Haydock back in November (when he drifted to 6/1 to retain his crown), Bobs Worth bounced back to his true form when returned to a more suitable track at Leopardstown, powering home like the top horse he is to get on top close home in the final 100 yards or so.'
Gold Cup Racecard | Friday's Cheltenham Tips

Silviniaco Conti's dominant display when winning the King George VI Chase at Kempton Park on Boxing Day has launched the Paul Nicholls-trained raider to the head of the betting for the Betfred Cheltenham Gold Cup, but having tried and failed to land glory in the Cheltenham Festival showpiece before there will be many punters aiming to take him on.

A strong Irish battalion is spearheaded by last year's hero Lord Windermere, who will try to land back-to-back wins in the blue riband event, whilst the progressive Road To Riches and Carlingford Lough, who is set to be ridden by AP McCoy add more depth to the Emerald Isle challenge.

Holywell has tasted Cheltenham Festival glory on two previous occasions and he will bid for glory for Jonjo O'Neill, whilst the likes of Hennessy Gold Cup and Argento Chase winner Many Clouds and former winner Bobs Worth just add more depth to the race.

RESULT:  An amazing performance by the novice chaser, Coneygree, tops the Festival by winning the Gold Cup in wire to wire fashion.  It has been 41 years since another novice took the Cup.  RACE REPLAY

Coneygree stablemate, CARRUTHERS, finds winner's circle.  A week after basking in the glow of Coneygree's success at Cheltenham, the 12-year-old stable mate favorite of the Coneygree connections enjoys a trip he hasn't taken in quite a while.  "There were - just like at Cheltenham - emotional scenes in the winner's enclosure and Bradstock's wife Sara, whose father Lord Oaksey bred Carruthers and Coneygree, said: "That's even better. I really love this old horse."

BELOW ARE LINKS TO EACH DAYS RACES, AND OTHER NEWS.  Each of the cards will provide handicapping advice, notes on the favorites, etc. The information at each race card will grow as we approach that day's races.

RESULTS FOR ALL THE RACES ALL FOUR DAYS - click here

Gary Nutting's analysis of every race at Cheltenham