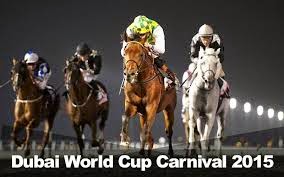 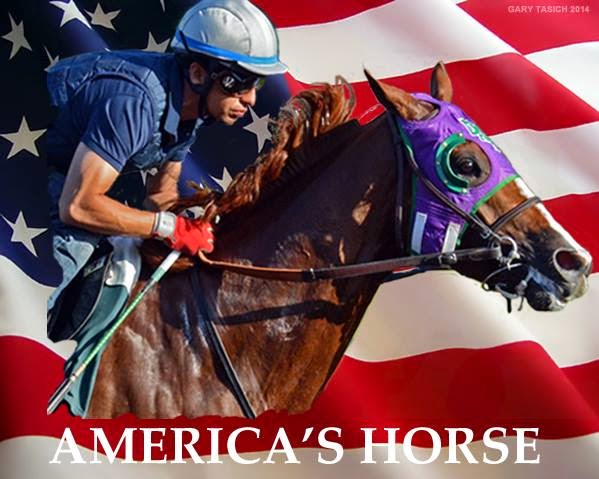 DUBAI WORLD CUP DAY!
$30 Million in one day of racing.  Coming in second you could still walk away a millionaire in some of the races!  There will be free live streaming in several places for this big event, which, because it is run in Dubai, will happen in the U.S. mostly on Saturday morning.  Dubai is 8 hours ahead of New York's EDT.  If it's 4 in the afternoon in Dubai, it's 8 a.m. in New York.

TVG will broadcast on television (if you have this in your cable lineup), but HRTV will not.  Your best bet will be to check in at www.amwestentertainment.com where free live streaming of the day's events will be broadcast.  Also, DRF will provide live streaming.  TwinSpires is free if you set up an account, and don't be put off by thinking you have to bet, you don't.  So, there will be several platforms to watch this extravaganza on Saturday.

When is it?
The Dubai World Cup will be staged on Saturday, March 28. Gates open on World Cup night at midday, with the first race run at 4.30pm. (8:30 a.m. EDT)   Scroll down to Featured Races for races and approximate post times, adjusted to EDT.

Ten Things You Should Know About World Cup Day


Every thing you need to know about Dubai World Cup day!

American-based horses looking to make a serious impact in Dubai
Brisnet's John Mucciolo gives his take on the fields as they have taken shape.
A very strong contingent of U.S.-based horses will take aim at various races during the 20th edition of the Dubai World Cup on Saturday at Meydan. With top runners in the most lucrative races on the day, the U.S. group might be leaving the desert with a lot of dirhams (dollars).

World Cup (UAE-G1)
Reigning Horse of the Year California Chrome (Lucky Pulpit) looms the one to beat and could be a fairly short-priced favorite in the marquee event of the day. The Art Sherman trainee was a big second in the San Antonio (G2) in his 2015 bow, finishing behind arguably the best dirt horse in training right now, and 'Chrome appears to be training forwardly since the tightener. Proven at the trip, the four-year-old has reportedly settled in nicely since his arrival and could spearhead a one-two finish from the U.S. runners. Read more

AMWEST ENTERTAINMENT - ALL ACCESS LIVE STREAMING
This site is comprehensive, handicapping, entries, race cards, and the LIVE STREAMING for each day's races.  Content will be added daily until March 28 at the AmWest site.

DUBAI WORLD CUP CARNIVAL kicked off Thursday, January 8 and has run each Thursday in January, with a couple of Saturdays later in the meet in February and March.  AmWest Entertainment live streamed the races each day of the meet.  All the info you will need now for the World Cup Day will be provided by Pat Cummings and Joe Kristufek leading up to the big day, plus free PPs through  World Cup Day, March 28.  Catch up on what happened during the Carnival:


Carnival Wrap: What we learned from the Carnival
Official Carnival results for Super Saturday March 7

The DIRT IS BACK as the main track surface for the first time since American trained Well Armed won the World Cup in 2009.  American participation in the carnival had dwindled in recent years when the main track surface went from dirt to Tapeta in 2010 with the opening of Meydan Racecourse.  Notable US winners included Cigar in the first World Cup in 1996, and followed with wins by other American trained horses included Silver Charm, Roses In May, Pleasantly Perfect, Curlin, all on dirt, and Animal Kingdom in 2013 on the Tapeta surface.  The new dirt surface is expected to lure more horses from the U.S.

Full race cards listed below.  Replays will be posted as soon as they are available.


Times posted by ATR are London times - to convert to EDT (New York), subtract 4 hours. (Note:  Great Britain goes on Daylight Saving Time on Sunday, March 29, when the time between New York and London will return to 5 hours difference)
SATURDAY
Note:  Times shown below are EDT - ATR times are for London.

Lea   Pedigree  Equibase  Finished third behind California Chrome and Prince Bishop
Lea (First Samurai) is a most intriguing contender in the race and it should come as no surprise to see the six-year-old right there at the finish. Conditioned by Bill Mott, the Kentucky-bred is lightly raced since 2014 but has recorded four big efforts during that interval, coming up just short most recently in the Donn H. (G1). Trained by Bill Mott (Curlin)

Next stop Dubai as Rome aims to conquer the desert

Kellie Reilly, Brisnet:  Feb. 18:  Will Maftool and Mubtaahij bring their rivalry to Churchill?
"Godolphin's Maftool (Hard Spun) and the Mike de Kock-trained Mubtaahij (Dubawi) fought out a spine-tingling finish in the Dubai Carnival's  U.A.E. Two Thousand Guineas (UAE-G3), drawing 10 3/4 lengths clear of third and stamping themselves as a pair of quality three-year-olds.

Either way, since the U.A.E. Derby offers a total of 170 points toward the Kentucky Derby (G1), Maftool and Mubtaahij could earn enough points to carry their rivalry to Churchill Downs."  Read more
﻿

The relevant/important Carnival stakes races results/replays are posted below by date.  To look at all the finishers in each race, click on the RESULTS PAGE - AMWEST above. The full calendar for the Carnival as well as World Cup Day is shown below. Recommend watching the replays of past races to get to know the horses.  Many will run on World Cup Day.