A Hero in any Genre

ONE FOR THE AGES 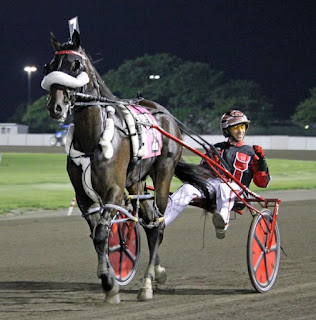 Wiggle It Jiggleit is no johnny-come-lately, he has been blowing up the harness circuit for pacers all year long. Wiggle It Jiggleit, the No. 1-ranked horse in harness racing’s weekly poll, has won 18 of 20 races this year and pushed his seasonal earnings to $1.76 million with his victory in the Little Brown Jug.

CLASSIC JUG WIN FOR WIGGLE IT JIGGLE IT
It's Little Brown Jug day
It’s rare to see any racehorse re-engage and come back on the way Wiggle It Jiggleit did in the stretch, especially off the fractions and an extended first-up trip, but the world record holder showed why he is a horse for the ages.

George Teague, a decorated horseman in his own right, was interviewed in the winner’s circle afterward, where he admitted that he thought his world record holder was beaten.

"Well, my thoughts,” said George, “I was a little bit confused when he left the gate. I was like, ‘this isn't working out as planned.’ And then he looked and he popped over at the eighths pole, that didn't work out as planned, and at the head of the stretch I dropped my head and said, 'this son of a gun is going to lose today.' And he proved me wrong."

George had said leading up to the Jug that Wiggle It Jiggleit was the best horse he has ever seen race, and the gelding’s astonishing effort in the second heat stamped that statement as true. "He's a little different than a lot of horses,” he said, “and that explains what he did today."

The Jug victory was the first for Montrell and was an instant classic for the sport.
Wiggle It Jiggleit wins stretch duel to capture Jug

7-19-15 - Wiggle It Jiggle It wins Meadowlands Pace for Team Teague on stakes-filled card
The gelding posted his 14th win in 15 starts this year, losing only the North America Cup to Wakizashi Hanover by less than a length.

7-11-15: If there was even a hint of doubt as to the best 3-year-old colt pacer in the country, Saturday’s Meadowlands Pace eliminations wiped clean those thoughts. Wiggle It Jiggleit unveiled a new wrinkle racing from off the pace and swooped by the field to join In The Arsenal as the $50,000 elimination winners.  Meadowlands: Wiggle It Jiggleit impresses again

Wiggle It Jiggles to new world record - 5-11-2015
At the time of the writing of this story about his world record, Wiggle It had earned less than $100,000. His recent win in the Little Brown Jug pushed his earnings to $1.76 Million.

History
It began in 1937 when the Delaware County Agricultural Society's members, at their annual meeting, voted to move the County Fair, held since its inception at Powell, to Delaware on a tract of land at the northern edge of the city. Two years later a half-mile track was built and provided the stage for harness racing. R.K. McNamara, a local contractor, designed and built the lightning fast track. Enter attorney Joe Neville, whose family had been identified with the standardbred sport for many years, and his friend, Henry C. "Hank" Thomson, sports editor of The Delaware Gazette. Neville, who had campaigned horses on the Grand Circuit and was familiar with its officers and stewards, was successful in obtaining Grand Circuit dates for the new Delaware track. Neville, concerned over the years by the emphasis placed on the trotter, turned his efforts toward showcasing the pacers, particularly the 3-year-olds. The Little Brown Jug Society was formed to stage the Grand Circuit meeting. Neville headed the organization with Thomson as secretary-treasurer. Then came the birth of the Little Brown Jug, named through a newspaper contest, with its previews in 1944 and 1945. The initial Jug in 1946, with a purse of $35,358, was won by Ensign Hanover with Delaware's Wayne "Curly" Smart driving. Smart, a most successful trainer-driver on the Grand Circuit, was later to become an integral part of the Jug's operation as the track superintendent. Over the years the track monopolized the half-mile record section with world standard performances, mainly through Smart's skill in maintaining the fastest racing strip of its size in the country.

The harness racing industry conducts an annual Grand Circuit, which includes many of the most prestigious races for both pacers and trotters. Founded in 1871 and first conducted in 1873 at four tracks, the Grand Circuit now visits 17 tracks as of the upcoming 2012 season.

The most notable harness tracks in North America are the Meadowlands Racetrack in New Jersey, The Red Mile in Kentucky and Woodbine Racetrack and Mohawk Raceway, both in Ontario. Since 1947, the "United States Harness Writers" Association annually votes for the "Harness Horse of the Year." Since inception, a pacer has received the honor 31 times and a trotter 26 times.

World's premium pacing event
The Little Brown Jug is a harness race for three-year-old pacing standardbreds hosted by the Delaware County Agricultural Society since 1946 at the County Fairgrounds in Delaware, Ohio. The race takes place every year on the third Thursday after Labor Day. Along with the Hambletonian, a race for trotters, it is one of the two most coveted races for standardbred horses. Little Brown Jug, a pacer, who won nine consecutive races and became a USTA Hall of Fame Immortal in 1975 had the world's premium pacing event is named in his honour.