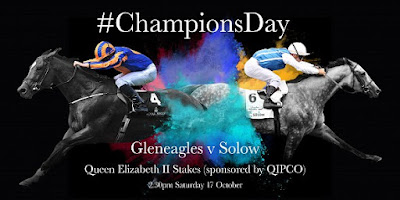 Jack Hobbs forced to overcome disappointing Champion Stakes draw
Gleneagles and Solow possible QEII clash at Ascot
O'Brien: Any rain at all, and Gleneagles out

The British Champions Series is a series of 35 top British flat races, which culminates in a day-long festival of championship races, known as British Champions Day. It was inaugurated in the 2011 season to draw together some of Britain's key flat races into a meaningful championship, with the hope of generating coverage and stimulating interest among the more casual sports fan.
Oct. 12, 2015

Jim McKay’s vision for a sires stakes program for Maryland, like the Breeders’ Cup, has proven to be an unqualified success. Also known as Maryland’s Day at the Races, this special race day is an annual reminder of all that is good in Maryland’s Thoroughbred industry.

This year’s landmark event has given us a special opportunity to take a walk down memory lane. The bumps in the road and milestones, both met and conquered, have contributed to the uniqueness of this extraordinary day of racing.
These recollections begin with the concept in 1984, the formation of a productive partnership and wander through the years, noting many of the novel ideas pioneered by Maryland Million Limited that are now considered traditions. Jim McKay Maryland Million Day is a tribute to the many people who came together and worked so hard to bring a dream to reality.
The event, now truly a Maryland tradition, was conceived, produced, established and now celebrated here. This year is the time to enjoy the memories as we look forward to the future. Read more at source

Making a return trip to New Jersey and the Grand National is Atlantic Equine’s HUNT BALL, who scored three straight victories in English allowance hurdles over the summer. In 2013, Hunt Ball shipped into Far Hills and finished ninth in the Grand National. Regular jockey Andrew Tinkler will be in the saddle for trainer Nicky Henderson.

Carrying the American hopes will be Jacqueline Ohrstrom’s Demonstrative, last year’s Grand National winner and American champion. The stalwart Elusive Quality gelding will have something to prove after two lackluster efforts at Saratoga.
Read more at source

For U.S., race replays posted after the completion of a race at the CARD (about a 20-minute time delays)

DOWN UNDER
Go here to check on the Caulfield Cup in Australia Race 9 - wee hours of the morning in U.S.
Melbourne is 15 hours ahead of New York time, so the Caulfield Cup should have a post time of 2:40 a.m. ET.
Caulfield Cup: Hokko Brave in perfect order for first task on the way to Melbourne Cup

Considered one of the more important races leading up to the Melbourne Cup on the first Tuesday in November, with its $3 Million Aus purse, the international status of the $3m Caulfield feature has grown in recent years with overseas raiders winning two of the past three Cups.

Admire Rakti charged home to win the 2,400m Caulfield classic last year, giving Japan its first victory in the race. The horse went on to start favourite in the Melbourne Cup but finished last after suffering heart failure and had to be put down after the race.

In 2012, French galloper Dunaden backed up his 2011 victory in the Melbourne Cup when jockey Craig Williams overcame a wide barrier to score an impressive win at Caulfield. Read more at source

RESULTS:  MONGOLIAN KHAN TAKES CAULFIELD CUP FOR NEW ZEALAND
Mongolian Khan’s win stamps him as one of Australia’s best modern day stayers. Last season as a three-year-old colt the son of Holy Roman Emperor became the first horse since the great Bonecrusher in 1986 to win the New Zealand and Australian Derbies. "He’s a very good stayer,” Baker said. "We wanted to make this a staying test and he just kept kicking. "He’s got a beautiful relaxed temperament and I think he loves being a racehorse.”


Results/Write-ups
Race 1 Long Distance flying start for Dettori and Gosden
John Gosden praised his jockey's "brilliant ride":  "He was too far back and Frankie knew that, so he did something about it and it was a race-winning move" was Gosden's review of his stablejockey's brilliant ride.  Dettori himself was keen to pass the credit onto the five-year-old he was sat astride. He said: "He was very brave for me and he took every gap. He's got a very low mileage and is unbeaten this season so he's on the up. He's a big unit that's for sure."  More at RacingUK

Race 2: Muhaarar blasts rivals away in Sprint
He turned an apparently competitive race, for which he was the 5-2 favourite, into a procession.
"I'm so delighted for everyone and it's a great effort by Charlie and the whole team," said Hanagan. "He's got such a fantastic temperament. I always thought he wanted a bit of cut in the ground and the race was never in doubt."

Race 4: Solow routs the field as Gleneagles flops in QEII
O'Brien says if he had it to do over, he would not run. Reasoning was if he is going to go to Breeders Cup, Gleneagles needed the race, so they took a chance. Does this mean Gleneagles is coming to the Breeders Cup?  More at RacingUK

Race 5: Fascinating Rock takes Champions Stakes in style
Found, the filly, was runner up and ran a very good race.
Found, who sat last under Ryan Moore, had to follow Fascinating Rock through before switching to the inside rail and the 9-2 shot could do no better than fill the same runner's-up spot she has also occupied on four of her previous six starts.  Jack Hobbs was sent off the even-money favourite but unlike stablemate Golden Horn in the Prix de l'Arc de Triomphe he was unable to overcome his wide draw, finishing third.  More at RacingUK

NEWS
Espinoza to join Zayats and Bafferts for charity event