TOUGH SUNDAY LIVES UP TO HIS NAME!


This one will steal your heart...  for some reason, this horse reminds me of Your Host, who Abigail Anderson has written about on her blog in March 2011. My hope is that Tough Sunday is as successful as the tough Your Host who had many obstacles to overcome, both on and off the track. Who knows if Tough Sunday will ever make any history in the breeding shed, as did Your Host, who sired one of the greatest geldings of all time, five-time Horse of the Year, Kelso. One thing for sure, though, he has done enough already to prove that miracles can happen and he has certainly defied the odds.

Tough Sunday - Pedigree
His pedigree is considered to be "modest", although his broodmare sire, General Meeting x Seattle Slew was a leading California sire for several years, and they don't come much tougher than Alydar who is on the top and bottom of his pedigree in the 3rd and 4th generation. Also on the bottom, in the 5th generation is none other than old Halo himself, the original "Big Toughie," Sunday Silence's papa. Halo sired two KY Derby winners, including Sunday Silence.

Toughie is so lovable... you would have to have a heart of stone to not love and appreciate just being able to survive the tough beginning he had. He was so lucky to have an owner that was sensitive enough to look for signals that the foal wanted to live. It tugs at my heart strings every time I read about his owner wrestling with decisions daily as to what to do with him, when Nick walks up to his stall and sees the little fellow's eyes following him. It was at that moment Nick made a commitment to see it through and give him every chance. Tough Sunday has his own Facebook page with almost 3,000 followers. It's no wonder, with his full story as told by his owner/breeder, Nicholas Alexander, it's really hard to believe this colt not only survived, but has continued to surprise and amaze by winning a couple of races, and finishing in the money in 6 of his 8 starts.

Although Toughie's story has been told in several horse racing publications, including the Daily News, BloodHorse, and Fox Sports (see links below), his owner and benefactor, Nick Alexander, has posted Toughie's story at his Facebook page, and is told in his own words:

"This colt had a tough beginning. He was very big and got stuck during delivery, and in struggling to get out his (umbilical) cord was severed and by the time we pulled him out, he had been without oxygen for some time.

"We rushed him and his mom (Sunday Dress, by General Meeting) to Alamo Pintado Clinic just a few minutes from our ranch in Santa Ynez. The news was bad: He was blind, deaf, had no nursing instinct, and a heart murmur.


"Dr. Erin Burn and her staff worked around the clock to stabilize him, but he developed pneumonia. He could stand up but couldn't lie back down. He looked like a pin cushion with so many tubes, IVs, etc.

"Because he didn't know how to nurse, his mom abandoned him. About the fifth day, he wasn't improving and I was told to make a decision whether or not to keep at it. The next morning I went to the clinic, and as I walked up to his stall, his eyes followed me.

"That was enough progress for me, but he still was in an ICU almost a month before he was strong enough to bring home. We pail-fed him and eventually got his mom to accept him, although he never did learn to nurse.

"A month or so later, we turned him out with other foals and mares."

"The colt made steady progress toward his breakthrough victory. He was third in his career debut Oct. 29 [last fall] at Santa Anita, and then second Dec. 18 at Los Alamitos Race Course, both at six furlongs, before finding the winner's circle when stretching out a furlong further.

"With Tyler Baze aboard, Tough Sunday dueled for the early lead before settling into a stalking trip in the maiden special weight race. He bid for command again off the turn and led in early stretch by two lengths before drawing off unchallenged as the 7-10 favorite in the seven-horse field. The time was 1:21.90 on a fast track.

Second setback: "In January Tough Sunday sustained a cracked cannon bone in his leg while racing at Santa Anita in the California Cup that required several months of rest and rehab.. he finally returned to racing on July 10th at Los Alamitos and came in 2nd in his comeback race.

"If there were an Eclipse Award for courage, Tough Sunday would be a prime candidate."

He's Back!  In his comeback race in July, Toughie ran an impressive second and finished well ahead of the rest of the field.

In August, he ran in a couple more allowance races, coming in a fourth in which he got caught wide, and then he ran a third at Del Mar.

Then, on October 4, it was almost too much to hope for. The "horse that could" made it back to the winner's circle at Santa Anita, his recovery from his second setback apparently complete. For most of the race, attending the pace up close to the leaders, he duked it out to the wire, prevailing by a neck. Toughie's not afraid of a fight!  Replay

Whatever he does from now until he retires, whether he ever wins another race or not, he has been successful beyond anything anyone could ever have imagined. He's won or finished in the money in 6 of his 8 starts so far, and he seems to try every time.

Tough Sunday's Facebook page reported that he's being considered for a race at Santa Anita on October 25th, or possibly at Del Mar on November 14th, both allowance races at 1 1/16 miles. Nick reported that he had a strong 5 furlong workout on Saturday, October 17, and a decision will be made in the next few days on which race he will be entered. GO TOUGHIE!

NEWS COVERAGE - A few of the many articles about this remarkable horse
BloodHorse: Courageous Cal-bred colt wins at Santa Anita
Fox Sports: Born deaf and blind, horse makes it to the winner's circle
Daily Racing Form: Deaf Colt, Tough Sunday, proves to be a survivor 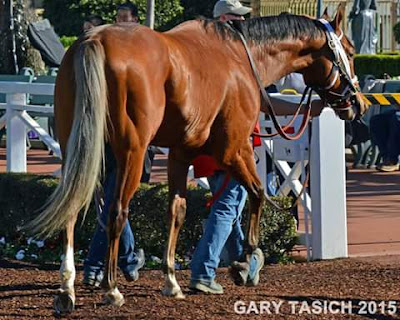