Let's Go To The Races - August 12-14, 2016
This is a non-commercial blog - Started as a convenience to organize my race viewing 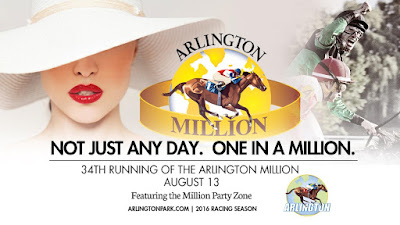 John Henry's Fun Facts:
Oldest horse to win Eclipse Award for Horse of the Year - at age 9
Oldest horse to win a Grade 1 race - at age 9 (tied)
Only horse to win the Arlington Million (G1) twice - 1981 & 1984
One of only three horses to win the Santa Anita Handicap (G1) twice - 1981 & 1982
Won more graded stakes than any other Thoroughbred - 25
Retired as the world's richest thoroughbred - July 28, 1985
Inducted into National Museum of Racing and Hall of Fame in 1990
Raced in 46 graded (G1,G2,G3) races
Raced on 18 different North American race tracks
Won inaugural running of the Arlington Million (1981)
Oldest horse at age 9 to win the Arlington Million (1984)
Won on 13 different North American Race Tracks
Stood just 15.2 hands and weighed about 1,000 pounds

Mondialiste pulled off an exceptional victory at Arlington on Saturday when taking the Arlington Million (G1) for his overseas connections. In doing so, the David O'Meara trainee stopped jockey Florent Geroux from a sweep of all the graded contests, though the rider did go five-for-five on the day including victories in the Beverly D. (G1), Secretariat (G1), American St Leger (G3) and Pucker Up (G3).
Even-money favorite Sea Calisi rallied from more than a dozen lengths down to take the $700,000 Beverly D. (G1), cementing her status as a leading candidate for the Breeders' Cup Filly & Mare Turf (G1) in November. 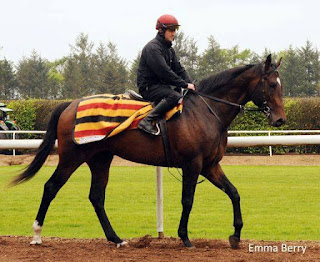 Trainer Kiaran McLaughlin reported that Frosted was in "excellent" shape one day after his easy victory in the Whitney Stakes (G1) at Saratoga.

California Chrome and Dortmund both worked on Sunday in preparation for the Pacific Classic (G1) on August 20 at Del Mar.

Lady Eli breezed on Saratoga's Oklahoma turf in readies for her return to competition in the August 27 Ballston Spa Stakes (G2) at the Spa.

Section below from Brisnet.com
Multiple champion Beholder geared up for a possible title defense run in the August 20 Pacific Classic Stakes (G1) with a five-furlong breeze in :59 Wednesday morning at Del Mar.

Tryster and other runners taking part in Saturday's International Festival of Racing at Arlington took the Polytrack on Wednesday to put in their final moves before the big events.
The main contest will be the Arlington Million (G1), which drew a field of 13 including Grade/Group 1 winners Tryster and World Approval. Also on the card will be the Beverly D. Stakes (G1), Secretariat Stakes (G1), American St. Leger (G3) and Pucker Up Stakes (G3).
The Fourstardave Handicap (G1) and Adirondack Stakes (G2) are the featured attractions at Saratoga on Sunday, while at Del Mar six maiden winners will line up in the Best Pal Stakes (G2) at Del Mar.

In other news, trainer Todd Pletcher reported that Comfort came out of his runner-up performance in the Whitney Stakes (G1) in good order and is under consideration for the Woodward Stakes (G1) on September 3 at Saratoga.

Vic Stauffer has been tabbed to call the races at Oaklawn Park in 2017.
John Mucciolo identified a few nice horses that fans should keep an eye on at Del Mar.