Let's Go To The Races - August 19-21, 2016
This is a non-commercial blog - Started as a convenience to organize my race viewing 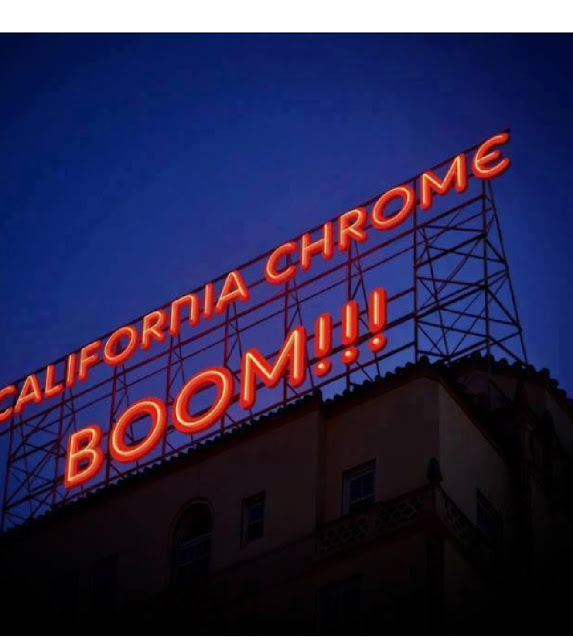 
THE BEST HORSE AROUND? IT'S CHROME!
The GI Pacific Classic was not supposed to be easy for California Chrome (Lucky Pulpit). The opposition included last year’s winner in the superstar mare Beholder (Henny Hughes) and a serious race horse in Dortmund (Big Brown). In Hoppertunity (Any Given Saturday) and Imperative (Bernardini) there were still two more millionaires in the race. The wise guys were jumping off the Chrome bandwagon, many of them predicting that this would be the occasion where we would get his comeuppance.

Instead, we saw what was arguably the best performance ever by a great race horse. Songbird, Beholder, Tepin (Bernstein), Frosted (Tapit), Flintshire (Dansili {GB}), Exaggerator (Curlin), they are all wonderful horses, some of the best we’ve seen in a long time. But none of them belong in the same sentence as California Chrome. What a horse, indeed.  Read more at source

"To put in to perspective what the Mexican jockey achieved by taking California Chrome’s career earnings to a monstrous US$13,252,650 (Dh48,671,682), the Dubai World Cup-winning combination became just the third horse and jockey to win from the inside post position in the 26-year history of the Grade 1 contest.

"California Chrome was the first horse since General Challenge in 1999 to emerge from the inside, but it was how Espinoza flummoxed his fellow riders that will live long in the memory.

"As soon as the gates opened, Espinoza gunned California Chrome to the lead and he then drifted at least three off the rail."    Read more at source

Gary Stevens: “I was hoping for the same kick she had last year. She kicked, and he opened up,” Stevens said. “When he opened up, I knew I’d have to save something for the last eighth if I wanted to be second. Victor was playing with us. I don’t think he let him run. That’s kind of scary.”

Gary Stevens: "Beholder’s jockey, Gary Stevens, said he was hoping Dortmund’s trainer, Bob Baffert, would have told jockey Rafael Bejarano to put pressure on California Chrome from the start.
“Victor was loaded,” Stevens said. “He ran a great strategic race. What a horse. California Chrome is as good as I’ve ridden against.”

Bob Baffert:  "Baffert said the race was “over the first eighth of a mile,” when jockey Victor Espinoza aggressively sent California Chrome from his rail draw and secured the lead. “Victor put the shock and awe at the beginning. That was it,” Baffert said. Baffert said he’d wait a bit before deciding on a race schedule for Dortmund and Hoppertunity this fall. “My horses fired,” Baffert said. “The other horse was too good. He was the better horse. Sometimes you’ve got to say you got your ass beat.”

Art Sherman: "She [Beholder] was driving to catch him and I knew that if Victor had to get after him, he was just going to rebreak and pull away. What can you say about him? He's just a super horse. That's why he's the best horse in the country. Sherman added, "When you get a couple of horses [like California Chrome and Beholder] in the same race--when do you ever see that. The mare ran a hell of a race".

Richard Mandella: "No way I’m anything but proud of her,” Mandella said Sunday morning. “She beat some pretty nice horses. She ran well enough to win most Classics, but not that one. The winner ran awesome.”

Art Sherman: “He’s so much stronger. He’s in the best part of his career now,” Art Sherman, who trains California Chrome, said at his Del Mar barn on Sunday morning. “It’s kinda awesome to watch. “You’ve got the best horses in the country. These races are tougher,” Sherman said, comparing the current campaign to when California Chrome was 3. “I think he’s the best horse in the world, not that I might be biased.”

Watchmaker:  "Dortmund couldn’t keep up this time, but Beholder tried every step of the way (and did not lose one iota of stature finishing second), and yet California Chrome just kept running away from her."

Watchmaker:  "Where California Chrome might pick up some extra points for his Pacific Classic effort – like he needs them – is speed did not look like it was carrying at all on Del Mar’s main track Saturday. In fact, California Chrome was the only front-running winner from the seven dirt races on the day. So he did what he did on a track that appeared tilted against the method he employed. Yeah, most impressive."

Richard Mandella:  Beholder’s trainer, Richard Mandella, was gracious in defeat.“I went over and told Art that he did a fabulous job with his horse,” he said. “He’s always been a great horseman. I’m just sorry it was at my expense.”

“She is just amazing, and she keeps on getting better and better,” said [Mike] Smith, who won the Alabama each year from 1993 to 1995 with Sky Beauty, Heavenly Prize and Pretty Discreet. “We were running along a pretty good clip and I was kind of surprised that someone was going with her [Go Maggie Go] which was fine. We can’t always get an easy lead and she was comfortable going along down the backside and well within in herself. I knew she was going to run well.”

"Hollendorfer indicated that a start in the Sept. 24 GI Cotillion S., a race in which Havre de Grace turned the tables on Blind Luck, could be next for Songbird. She could square off there with Kentucky Oaks winner and fellow ‘TDN Rising Star’ Cathryn Sophia (Street Boss)."  Read more

Also on Saturday, 11 sophomore fillies will line up in the Del Mar Oaks (G1) and Flamboyant will seek a trifecta of Grade 2 victories in the Del Mar Handicap (G2). The Fourstardave Handicap (G1), rescheduled due to last Saturday's card being called off because of storms at Saratoga, features defending champion Grand Arch.

In Jalisco, there's a house that Chrome built - Jay Hovdey
"Don’t bother asking Raul Rodriguez whom he likes. He is too busy fussing with California Chrome’s hourly needs to tout the obvious. For 3 1/2 years, Rodriguez has been the man in the stall, at the shank, in the van, and on the plane."

Below from Brisnet.com
Catch a Glimpse hopes to keep turf record perfect in Lake Placid
Canadian Horse of the Year Catch a Glimpse will try to stay undefeated on turf when lining up as part of a seven-filly field in Sunday's Lake Placid Stakes (G2) at Saratoga.

Scott Shapiro discusses the best ways to wager on Saturday's Pacific Classic (G1) featuring Beholder, California Chrome and Dortmund, while James Scully explains why Beholder is a serious threat in the race.

For those seeking all Pacific Classic, all the time, check out the Pacific Classic News & Notes blog.
Dave Litfin took a look at wagering strategies for the Alabama Stakes (G1).

Dick Powell talked about the powerful thunderstorm that hit Saratoga last Saturday which ended up causing part of the card to be canceled.

Cross-country at Del Mar, five contenders for next Saturday's Pacific Classic (G1) clocked moves over the track including Hard Aces, Win the Space and Dalmore.

more interesting action at Saratoga occurred during morning hours. Undefeated Lady Eli turned in another work in advance of her upcoming return in the Ballston Spa (G2), while a trio of Travers (G1) contenders turned in drills, though Preakness (G1) and Haskell Invitational (G1) winner Exaggerator did not.

Songbird, California Chrome and Beholder star coast-to-coast
A star-studded Saturday is on tap at Saratoga and Del Mar, with Songbird going in the Alabama Stakes (G1) in New York and California Chrome taking on defending champion Beholder in the Pacific Classic (G1) at Del Mar.

Also on Saturday, 11 sophomore fillies will line up in the Del Mar Oaks (G1) and Flamboyant will seek a trifecta of Grade 2 victories in the Del Mar Handicap (G2). The Fourstardave Handicap (G1), rescheduled due to last Saturday's card being called off because of storms at Saratoga, features defending champion Grand Arch.

Teresa Genaro took the time to review Saratoga's meet at the midway point.