Let's Go To The Races - August 27-28, 2016
This is a non-commercial blog - Started as a convenience to organize my race viewing 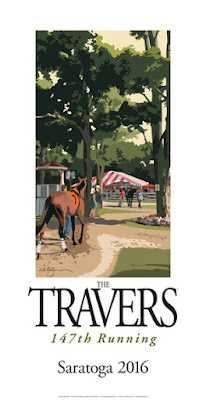 Poof! There goes the Travers and track record!

What they said
"Just to win at the Travers is incredible. Saratoga--when I walked
in today, it was just--you could just feel the electricity in the air...
Every time you looked up and you saw these [Juddmonte] colors,
it was Bobby Frankel, one of the greatest trainers ever. To me, it
was a very emotional win to see those colors. I feel like I finally
made it in this business." -Bob Baffert, trainer of winner
Arrogate and second-place finisher American Freedom


"I had to go for it. I was really comfortable the whole race. It was
a good second for my horse. The winner, he was just the best.
The winner, he went for it and he was still holding. I knew this
horse [Arrogate] could run all day; it was the best I could get
from my horse." -Rafael Bejarano, rider of runner-up American
Freedom


"We ran into a freak today, who ran the fastest Travers [ever]. I
thought Florent [Geroux] gave [Gun Runner] a great trip from
the No. 14 draw. He wheeled out a little early at the
three-eighths pole because he thought he had a lot of horse, but
that horse on the lead [Arrogate], he didn't back up at all. That
probably cost him second, chasing something late that you're
not catching early. On a dry track, we saw how very high quality
Gun Runner is, and it is very comforting to be able to throw out
the Haskell [fifth on a sloppy track] now.


On Creator, watching him around the turn, and Irad [Ortiz, Jr.]
was riding him around the turn. He just doesn't run the turns
here very well. When they went down the backside, I thought
Irad had him in a great spot, the fractions were obviously solid
because he [Arrogate] never slowed down, but he didn't handle
the turn." -Steve Asmussen, trainer of third-place finisher Gun
Runner and seventh-place finisher Creator

"I thought Gift Box and Connect got great trips. I loved that they
had no one around them in the middle of the pack there, no
traffic, with a really strong pace up front. I was feeling good
midway down the backside but, boy, that was some
performance. I don't know that I've ever seen a performance like
that in any Travers. For Bob Baffert to run 1-2, he brought two
well-prepared horses. Hats off to him and his team." -Chad
Brown, trainer of fourth-place finisher Gift Box, sixth-place
finisher Connect and eighth-place finisher My Man Sam

HISTORY OF THE TRAVERS
The Travers Stakes was inaugurated in 1864, a year before Lee surrendered to Grant at Appomattox ending the American Civil War. The race was named for William R. Travers, whose horse, Kentucky, won the inaugural race. Video history of the Travers Stakes - the Midsummer Derby
The Travers has been run at four different distances:
In 1979, at the current distance of 1 1/4 miles, General Assembly set the record at 2 minutes flat, which has never been equaled.  1979 Travers Replay  Filly Davona Dale was entered.

Some of the memorable Travers renewals include:

The 1930 Travers Stakes was won by the 100:1 long shot, Jim Dandy, who beat Gallant Fox, the Triple Crown winner, an upset for the ages.  The Jim Dandy Stakes is run on the first Saturday of the late July Saratoga racing season and is named in honor of the 3-year-old colt. There are some interesting follow-up stories to Jim Dandy's career and his post-racing success as a show-jumper (see follow up by author of Colin's Ghost, here. Many have wondered what happened to Jim, but after he finished his show-jumping career, he was retired and cared for until the end of his life.  1930 Travers Replay - Silent

In 1941, Whirlaway became the only horse ever to win the "superfecta" of United States Thoroughbred horse racing consisting of the United States Triple Crown of Thoroughbred Racing and the Travers Stakes. 1941 Travers replay is at 32:00 on the tape  (This is a documentary about Whirlaway)

In 1962, arguably the greatest Travers in history took place. Jaipur won by a nose-bob in track record time over the arguably more talented Ridan after a long, head-to-head battle over the entire mile and a quarter. Still written and talked about today, the race is listed in the 2006 book Horse Racing's Top 100 Moments written by the staff of Blood-Horse Publications. The race result determined which colt would be named the 1962 U.S. Champion 3-Year-Old Horse.  Replay - 1962 Travers

In 1982, Runaway Groom, the Champion Canadian Three year old, trained by John DiMario, arrived at the Saratoga backstretch after a grueling season competing in the Canadian Triple Crown, winning the Prince of Wales Stakes, the Breeders' Stakes, and finishing second in the Queen's Plate. At the Travers that year, Runaway Groom became the 2nd horse in racing history to beat the Kentucky Derby winner Gato Del Sol, the Preakness Stakes winner Aloma's Ruler, and the Belmont Stakes winner Conquistador Cielo in the same race. Sun Briar was the first in the 1918 Travers Stakes. Replay- 1982 Travers
﻿﻿﻿
On August 25, 2012, two horses, Alpha and Golden Ticket, tied for first place, making the race a Replay- 2012 Travers  dead heat. Following the race, two jockey statues were painted and two canoes were put in the pond.

The 146th Travers Stakes was run on August 29, 2015. Because Triple Crown winner American Pharoah was in the race the purse was raised to $1.6 million and NYRA capped attendance at 50,000, making the event a sellout for the first time ever. The 2015 race reaffirmed Saratoga's reputation as the "graveyard of champions" when Keen Ice defeated American Pharoah, picking up the pieces when Frosted (under a different rider) engaged American Pharoah in a speed dual, battling back and forth, so that Keen Ice was able to take down the Triple Crown hero by 3/4 of a length. Many however, consider the race to have been one of American Pharoah's best, in spite of losing. Replay - 2015 Travers

The above information has been compiled from various sources primarily, Wikipedia.

To watch race replays, after the completion of a race, click on the CARD -- about a 20-minute delay.


*****************************************
NEWS
Cavorting to Breeders Cup Distaff, Mohaymen gets time off
Kentucky stud duty could call for Flintshire in 2017
Woodward up next for Frosted
Mohaymen rerouted from Travers to Kings Bishop
Exaggerator goes well at the Spa
Majesto enters Travers picture
Shirl Penney goes from last to first
Tepin back to her awesome self
Caton and Doug Bredar and horse racing have been perfect together
King Congie rescued and to reside at Old Friends
This is how it is supposed to turn out, but unfortunately too rarely does. A lesson for other owners to step up when their horses don't always get the retirement they deserve.
Del Mar critics speak out at CHRB meeting
Runhappy gets back to work at Keeneland
Jim Rome remembers Shared Belief

Info below from Monday, Aug. 29, Brisnet.com

Arrogate, making his stakes debut, demolished Saratoga's decades-old track record for 1 1/4 miles by taking the Travers (G1) by 13 1/2 lengths in a time of 1:59.36. The Bob Baffert trainee easily eclipsed the previous standard of 2:00 set by General Assembly way back in the 1979 Travers.
Baffert also visited the winner's circle following the King's Bishop (G1) after Defrong cruised to a wire-to-wire score in the seven-furlong dash.

Turf star Flintshire enjoyed another facile win at the Spa, taking the Sword Dancer Invitational (G1) and remaining undefeated on the year.

Cavorting showed two-turns was no trouble when taking a deep renewal of the Personal Ensign (G1) for older fillies and mares.

Saratoga's major sprints for older horses and fillies and mares were swept this meet when Alfred G. Vanderbilt (G1) hero A. P. Indian won as a prompt favorite in the $700,000 Forego (G1), while Honorable Miss H. (G2) heroine Haveyougoneaway rallied to post the upset in the $500,000 Ballerina (G1) on Saturday.

One race after the Travers, Lady Eli's return in the Ballston Spa (G2) was spoiled when 27-1 long shot Strike Charmer caught the popular filly on the wire.