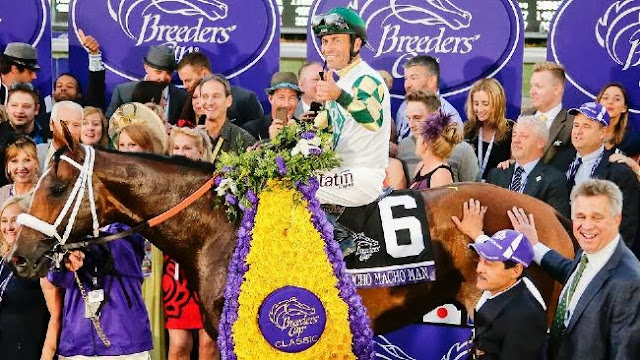 I woke up this morning with a smile on my face!!! I have had a love affair with this horse for nearly 3 years.  So happy for him and his connections, and all who had a part in bringing him to this point in his long career! So many people to thank for giving us this wonderful horse to fall in love with and admire, who have loved and cared for him, given him time to grow into his lanky 17.2h frame, have never pushed him to go beyond what would keep him happy and healthy. 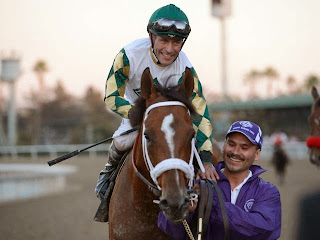 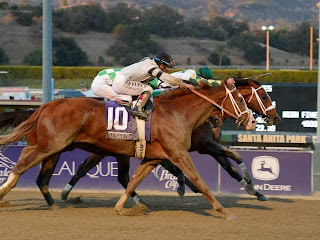 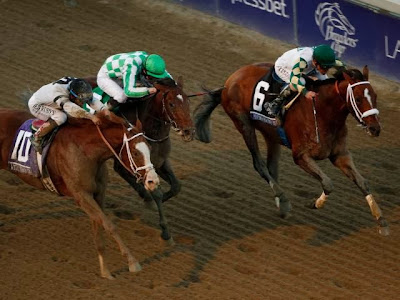 The Rios, where he was bred in Florida, the Dream Team group who first recognized the potential in the immature but impressive tall, lanky, big bay early on and paid a not-so-princely sum of, I think, of about $60-$70K; and then the Reeves who believed in him and bought a majority interest, then later, bought the remaining shares.  Then there is his patient, dedicated, under-rated trainer, Kathy Ritvo, and last but not least, the racing manager, Finn Green, all who together have brought us a modern day fairy tale.


The sub-plots to this fairy tale just grow into an amazing array of circumstances that brought together the trio of trainer, a heart transplant recipient around the time of Mucho's birth; the horse everyone thought was dead who had been born on June 15 (father's day) in a field, who leapt up and ran like the wind, earning the nickname "Lazarus"; and, the Hall of Fame jockey who the year before was a commentator on TV when Mucho barely missed in the 2012 Classic, coming in a very close second to Fort Larned.


There are, of course, many others who deserve credit, such as his groom, his hot walker, his vet, and the countless others on his support team.


The Reeves deserve a lot of the credit, too, because they realized this was a top calibre horse and they could use some help in making decisions, so they hired an experienced racing manager in Finn Green.  No expense has been spared, and a lot of patience, patience, patience have been lavished on a horse of a lifetime for these connections.


What about Gary Stevens! The Hall of Fame jockey, away for 7 years, who played the great George Woolf in the movie Seabiscuit, returning in January of this year and having just an amazing second career at the ripe old age of 50!  Gary got to know his horse in the Awesome Again just recently, and in an interview has said he realized this was a very intelligent horse who didn't like to be hit, and who was so responsive that in the Classic, he never went to the whip, giving the gentle giant a hand-ride all the way.  More than a jockey, a true horseman!  Oh, the Classic just happened to be a Breeders' Cup race Gary had never won.


This is a tale which could only have been written in Hollywood, right?

And, the beat goes on!  Here is the Village People singing about their favorite horse:

Thank you so much for this great tribute to Mucho Macho Man. He will be missed at the races, but I will always be wishing him well in his new career.