LET'S GO TO THE RACES
Nov. 23-24
Note: This blog is non-commercial and was developed for my own personal use to organize my racing viewing activity.  Your comments as to its usefulness to you would be appreciated.  Thanks!


A hometown victory is expected in Sunday's Japan Cup, but most people can't seem to agree on whether it will be delivered by Gentildonna or Gold Ship.  While local race fans can't envisage a foreign victory, success for Gentildonna will be a win of sorts for Europe.  She will be piloted by England's top hoop Ryan Moore, who is replacing her regular partner Yasunari Iwata, the 2005 Melbourne Cup winner.   Read more at source 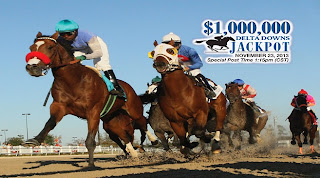 The Japan Cup and a whole bunch of American races for 2-year-olds highlight the weekend racing schedule.

Sunday's Japan Cup, worth $5.8 million plus potential bonus money, drew three foreigners to take on a somewhat depleted home team.  The North American 2-year-old races are keyed by the $1 million Delta Downs Jackpot and the $500,000 Delta Downs Princess. Under the former graded stakes earnings system, the Grade III races formerly were a virtual "get in free" card for the winners for the Kentucky Derby and Kentucky Oaks. In the new points system, the money is more the thing. 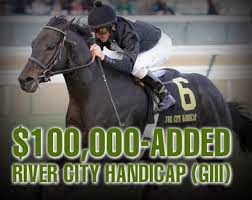 BAHNAH will run in the $500,000 Delta Downs Princess for 2 yo fillies, on Delta Downs Jackpot day. Hope she does well. She had bad luck on two recent starts, one in the My Trusty Cat at Delta Downs in October saw her win but she was DQ'd for bumping another horse on the far turn. At Saratoga in September in the Spinaway, she led to the stretch but was pushed out on a sloppy sealed track and lost momentum and faded. Maybe this will be her chance to get back to her early form in her first three races. Her debut she won by 6 and dead-heated in her second. She's a tiny little thing but she is a fighter!


SUNDAY, Nov. 24
INTERNATIONAL
1:55 a.m. ET Japan Cup, G1, Tokyo, 3yo+, $5.8 Million USD, 1 1/2 mi T  Barrier Draw
GENTILDONNA WINS in a blanket finish that saw several within a neck or a nose of each other.
Full result    Video Replay - English version will be available Monday
BloodHorse: Gentildonna posts repeat victory in Japan Cup
The great Buena Vista actually won two in a row, but she was DQ'd in her first in 2010, but won in 2011, vindicating her unpopular disqualification a year earlier.

In what is one of the strongest international lineups ever assembled, North American legends Mike Smith and Gary Stevens will join peers from around the globe, among them the three-time British champion Ryan Moore, five-time champion of France Christophe Soumillon and two riders who have ignited the Hong Kong circuit this season, 13-time champion Douglas Whyte and Joao Moreira.

"The line-up for the 2013 International Jockeys' Championship is about as A-list as it gets," said William A. Nader, the Hong Kong Jockey Club's Executive Director of Racing. "It says much about the prestige of this important international event that we have a line-up of some of the world's great riders, all coming into the IJC in outstanding form. It will be fascinating and incredibly exciting to watch these international stars showcase their skills around Happy Valley Racecourse, one of the sport's iconic venues."

Australia:  Kerrin McEvoy
Darley’s rider in Australia. Winner of 44 G1 races around the world including the Melbourne Cup

Japan:  Suguru Hamanaka
The winning-most jockey at JRA racecourses in 2012 who landed the G1 February Stakes this year.

The Championships, to be hosted annually by the Australian Turf Club at Royal Randwick, will comprise 10 championship races across two consecutive Saturdays beginning on April 12 and culminating on April 19. The program is a combination of well established, traditional races plus relocated races from other dates in the wider autumn carnival period.

Over A$18 million in prize money will be won over the two headline days of autumn making The Championships one of the richest racing carnivals in the world. On the first Saturday, The Doncaster Mile will be worth A$3 million, while the T.J. Smith Stakes is now A$2.5 million and the Australian Derby offers A$2 million in prize money.